Hot rod inspiration is everywhere. Down the steps, on the sidewalk, in the street, at the grocery store and places beyond. Maybe it’s the changing of the seasons, or maybe it’s because I’m in the middle of so many projects. Either way, wherever I am, I try to look closely for things that I can incorporate into whatever I’m working on.

Finding inspiration isn’t hard when you end up at a place like Roy Brizio’s shop in South San Francisco. When I was there working on the Titus Roadster’s Pebble Beach judges’ book, I noticed a familiar sight parked out front. “Hey,” I said. “That must be Ed ‘Axle’ Stewart’s roadster.”

That’s exactly what it was. Now owned by John Mumford, the inky black highboy is the quintessential 1940s hot rod. From its signature dropped axle and louvered hood to its overall spotless appearance, there’s no denying that it’s in a league of its own.

Much like the Titus roadster, it was being prepared for its trip to Pebble. If I remember correctly, Roy and John had it out for a test drive earlier in the day.

I’d seen the car in books and magazines, but never in person. I took a moment to appreciate the finer points, particularly the front suspension and custom-built headlight bar. And then there was the dash full of gauges and those chromed tube headers, which ran beneath the frame with capped ends. It didn’t take long for me to realize that this has always been a well-built car.

The best part? It was just parked right there in the open. No ropes, no signs, no display. Just a historic hot rod out in the lot on a Thursday afternoon. Inspiring, isn’t it? 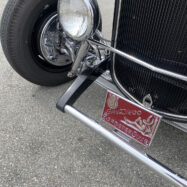 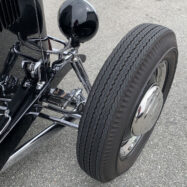 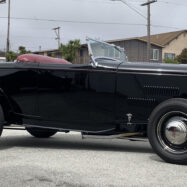 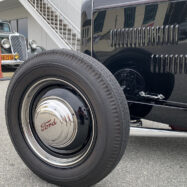 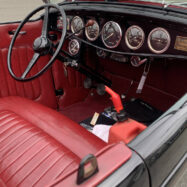