Posted by Ryan on December 17, 2018 and filed under: History, Hot Rods

We’ve talked at length about the custom Corvettes that history has offered up, but in my mind I’ve always resisted from listing my favorites as I’ve known of another, more obscure example, that I simply couldn’t find images of. I knew it existed, because the memory of studying the car from one of my dad’s magazines has haunted me for years. It’s those dual roll bar hoops… I couldn’t forget them.

This morning, I finally found the images I was looking for… and they were in a June, 1959 issue of Motor Life Magazine. This is strange for a number of different reasons, but mostly because I have no idea why my old man had an old issue of Motor Life sitting around. He wasn’t into traditional hot rodding and Motor Life was mostly a shit publication after the title change from Hop Up.

Regardless, this is the car I’ve been thinking about so long.

It was owned by Robert Clews. Robert was an original Oilers Car Club member and an avid hot rodder. He fielded cars at Bonneville, owned a number of street roadsters, and was generally a hoodlum of our ilk. But the car was actually built by Bob McNulty. Bob was THE fiberglass guy of the 1950’s and 60’s. While Ed Roth was creating messes to great success, Bob was working surgically and creating things like Corvettes and Astra Coupe Kits to standards Detroit could only dream of. 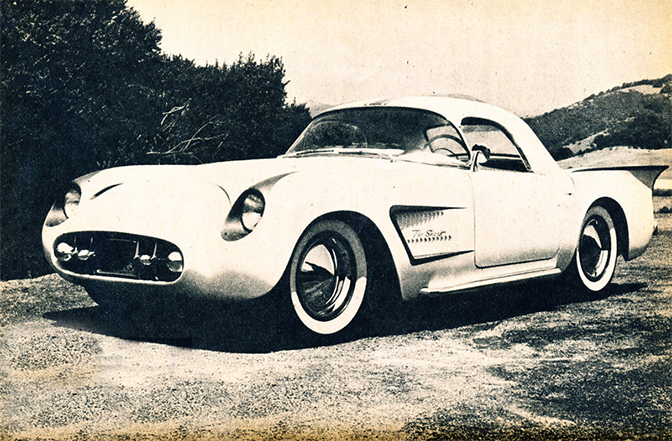 Anyway, sometime around 1958 Clews bought a brand new Corvette and took it to McNulty for an attitude adjustment. The result is nothing short of stunning – simple changes with purpose and direction. Here is the result: 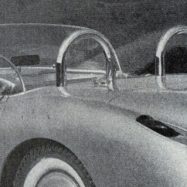 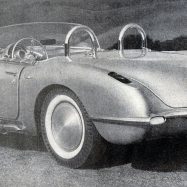 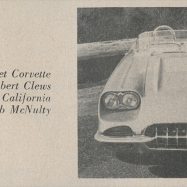 Anyone know of any other images of the car? I don’t remember the headlight treatment and I’m not totally sold on the idea of such a deep tunnel… but I want to reserve judgement until I can possibly see them from other angles. Enzo might well approve… and if he does, well…