Posted by Ryan on October 11, 2007 and filed under: Feature Articles 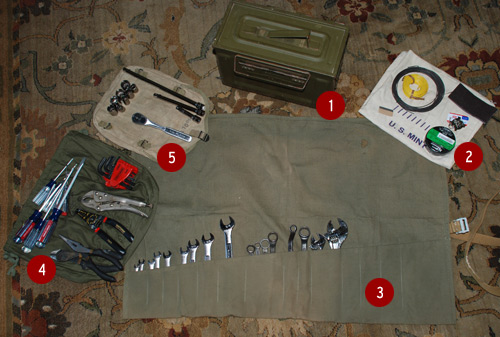 You might remember the “boy scout” post from a few months ago. Essentially, Keith Tardel sent me an ammo box full of spare parts to carry on board my a-coupe just in case the inevitable happens. In that post, I mention a second ammo box that carries some basic hand tools and supplies. I held off on posting details as I didn’t want you guys to think I’m absolutely nuts, but what the hell.

1. Everything is housed in a 1943 issued .50 cal ammo box. These are still pretty easy to get and can be had for around $20 a pop for a decent one. The main difference between an early .50 cal ammo box and the later is that the WW2 issued boxes were side opening and had a flamed logo on one end. The .30 cal boxes of the same era are about the half the size and just as handy. (Editors note: If there is any interest at all on these, I’ll do a full post some day… just ask.)

2. I store everything in the ammo box in canvas pouches and bags just to keep the rattles away. The first is a money bag liberated from a Missouri Bank in 1948. On the bag, there is a hand written label that states:

It’s big and roomy, but all I really keep in it is some wire, tape, a tad of sandpaper, a AAA card, and a razor blade. More or less, this is just over flow from my parts box.

3. The tool roll is my favorite. It was issued early in the war to tank mechanics on the front lines. I use it to store a decent set of Craftsman wrenches – old and new. I’ve got plenty of room to add more tools if I need them too.

4. This is a personal effects bag that was issued to some guy named Albert in 1944. These bags were used by base hospitals to store the personal effects of soldiers that were laid up in the hospital. I hope Albert made it out alright… By the looks of this bag, his personal effects sure did and my screw drivers, wire cutters, and various other hand tools seem to be enjoying the same cush.

5. Finally, we have my socket set. I keep it in yet another military issued canvas job. Frankly, I’m not sure what in the hell this pouch was used for initially. It has pockets within that are perfectly sized for my extensions and my socket wrench. The sockets themselves tough it out in the main pouch.