About done, about time…

Posted by Ryan on February 22, 2006 and filed under: Customs 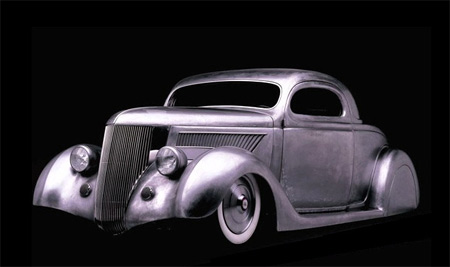 It’s been a very long time since a truly important custom was built. When the custom car movement all but died in the late 60’s/early 70’s it was mostly due to extravagance. Folks lost sight on the fact that the practice of customizing a car was to improve upon factory lines, not to out work or out do every other car on the show circuit. Customs died because of egos and showmanship.

It wasn’t until the 1980’s that the custom car came back into play. The movement was really small scale, backed by the KKOA, and mostly comprised of very dedicated custom aficionados. These were guys that understood the history of the custom and the goals of the practice, so it is understandable that most of these “early” efforts were done on a formula. They resurrected customs by going back to their roots, not reinventing what defined a custom.

To me, that is what makes Cole Foster’s latest such an important car. He started with what many consider to be the most well designed Ford ever produced and made it even better by following his own creative vision. Although there are appropriate nods to tradition, this car is predominately innovative. So innovative, that I don’t know that we have seen anything like it in over 40 years.

Forget who owns this car. Forget the bare metal pictures you have seen all over the net and magazines. Forget everything you know about hot rods and customs. Just look at the lines and strokes…