Posted by Ryan on August 14, 2009 and filed under: Event Coverage, Feature Articles

Joyo and I got off the airplane in Salt Lake around noon. I had always imagined driving into Wendover in something a bit more rebellious than a rented Chevrolet Malibu, but we were both eager despite our wheels. Those late model aluminum rollers were, after all, wheels of fortune and the Bonneville Salt Flats were our destiny. We were sure of it. So sure of it, that we just took off from the airport and headed south with no regard given to maps or GPS of any kind. Unfortunately for us, however, Wendover is west of Salt Lake.

Once straightened out, Joyo and I set the cruise control on 85 mph, turned up the sounds of gansta rap, and headed for our destiny. About ten miles outside of Wendover we noticed a salt lake and halted at a rest stop to take a taste.

We continued on and arrived at the Wendover Nugget Casino and Hotel at around 4:00 pm. The Old Crow Speed Shop fellas, our hosts for the week, weren’t off the salt yet, so Joyo and I decided to take a look around the joint while we waited. After taking a peek at a few street cars that had gathered in the parking lot, we ventured inside and into another world. The sights and sounds of the interior Nugget were… foul… wretched… loathsome. Imagine Vegas in 1984 – the patterned carpets bring headaches, the PA system delivers the best of 1980’s pop music (24 hours a day), and the Ukrainian waitresses on work/study visas bring watered down drinks so long as you over pay them. None of this seemed to bother the local blue hairs as they stabbed coin after coin into slot machines.

We must have been wide eyed when Bobby Green and Lucky Burton showed up to check us in. Two Texans in the middle of a terrible Vegas dream (or Utah or Nevada or wherever the hell we were) had to stick out in the most pronounced of ways. In any case, we didn’t scare the Old Crow team off and plans were set to meet at the salt at 7:00 am the next morning. The group of us gobbled down some shitty buffet food, took some drinks from the Ukrainians, and then hit the sack.

It took a long time for that morning to arrive. Joyo and I discovered just how hard it can be to sleep through Cindi Lauper with a broken air conditioner humming along to fill in the short breaks between her hits. When the time finally came, I wasn’t sure what to expect. Wendover was one of the weirdest places I had ever been. What in the hell had I gotten myself into?

We took the Speedway exit, drove past the “bend in the road,” and creeped (in honor of Creepy Jack) out onto the salt for the first time. This is where the fancy words and creative elaborations stop. There are no words to describe Bonneville. You can’t adequately put together sentences and expect folks to realize what the salt is ACTUALLY like. I assume it’s different for everyone, but for me it was one of the most spiritual moments of my life.

I don’t think John or I said much for the first few miles. We just took it in and processed it all in our own way. Ten or so miles later and we found ourselves at the Old Crow pit. The belly tank looked incredible parked on the salt, but we had no time to marvel as we were already running late for the driver’s meeting.

The driver’s meeting is about what you would expect. An SCTA official goes over the general course layout, talks about safety, introduces “Glen Fryburger,” and then everyone goes about their business. About half way through, I lost interest and wondered off down the salt. It’s a brutal place. Imagine dumping a bag of salt on the ground, wetting it, and then stomping the shit out of it. Now, imagine a couple hundred square miles of it and an incredibly bright sun. Bonneville quite literally is a miserable place.

That said, you don’t notice how miserable you really are on the salt. The incredible imagery mix of vintage steel, modern technology and bizarre speed freak personalities distract your ability to feel all together. You just are on the salt. My brain was never fully able to comprehend everything around me. Similar to how I handled the Nugget, I just coped.

In any regard, it wasn’t long before one of the Old Crow guys grabbed me and told me to get my ass in the truck. It was time to get in line and wait… wait… wait… You do a lot of waiting at Bonneville. It might sound a bit agonizing and well, it is. But there is also something enduring about it. The staging lines move slowly and most of that time is spent bullshitting with the folks around you. Joyo and I got to know the Old Crow guys pretty damn well – Bobby, Lucky, Jack, Joe, Max, etc… I could tell you most of their life stories and getting this background on the fellas was somewhat convenient. See, my first ride in the push truck changed my life forever and it was comforting to actually know the fellas around me at such a profound moment.

The starter gave the sign, Lucky gave his truck gas, and Bobby revved away on that little banger motor. The instant the belly tank pulled away from the push truck, I felt something drop in my stomach. It was the most beautiful thing I have ever seen. In a split second, I thought about my favorite old Bonneville photos, my favorite old cars, our history, our pals, everything that makes traditional hot rodding what it is… and I thought about it all at once. The feeling was more than a sum of it’s parts. It was salt fever fellas… And I have it.

After a couple of more runs, it was time to pack it up for the day and head back to the Nugget. As scary as that vile little casino is, John and I welcomed the chance to get out of the sun and off of our feet. It was another long night of 80’s pop and hot temps in room 137, but I felt fresh in the morning and couldn’t wait to get back on the salt. And that’s another weird thing about Bonneville – no matter how dead tired you might be, the salt brings you back to life.

A perfect example is my Sunday morning. The night before, Keith Tardel and I spent way too much time paying the Ukrainians. After a number of tequila shots and more than a few beers, we called it quits at 4:00 am. Of course, I had to meet the Old Crow guys in the lobby at 6:15 am. With less than two hours of actual sleep time and what should have been a pretty mean hangover, I showed up on the salt ready to go and no worse for wear on Sunday. Somehow, the salt breeds life.

In any regard, Sunday was disastrous for the Old Crow team. We had been mis-reading the exhaust temp readout (Celsius… Fahrenheit… What’s the difference?) and as a result were running that poor little H&H banger motor way too lean. Eventually, it caught up to the boys and a burnt piston had to be replaced. They worked most of the day and into the evening to get the deed done, but did just that… I was impressed with their focus and determination.

With the piston fixed and the exhaust temps figured out, the fellas quickly calculated that they needed more gas. As luck would have it, Clive (of Stromberg fame) was in town from England and had three brand spanking new 97’s to stuff on top of the banger. With little time to tune, the crew got the tank in line and down the salt. Bobby ran 133 and some change, but wouldn’t come any closer to his own 135 record. Frustration was short lived, however, as the boys had a back up plan.

On Tuesday, Lucky bolted some fenders on to the tank and reclassified the Old Crow as a streamliner. The class change allowed Bobby to go out and shoot for another one of his own records that was set last year at 104 mph. He crushed it with a 128 mph pass and then backed it up on Wednesday. The new V4F/FS world record is now just over 128 mph and is owned by Old Crow.

Of course, by the time the Old Crow team was downing their celebratory Old Crow Bourban, Joyo and I were headed back to Texas. We were close to death… Too many long days on the salt and late nights with Cindi and the Ukrainians will do that to ya. We did however survive and plans are already in the works for next year.

There is a ton of coverage of the 2009 Bonneville Speed Week on the H.A.M.B., but here is mine just in case your itch isn’t scratched:

The above video was taken from multiple angles on the pass that burnt the Old Crow piston. It’s gorgeous footage that is hard to watch just once… Pay particular attention to around the 2.5 mile mark. You’ll hear the motor cry and a puff of smoke appear just below the canopy. 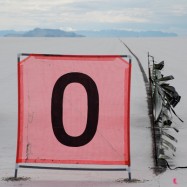 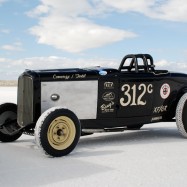 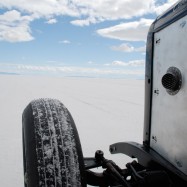 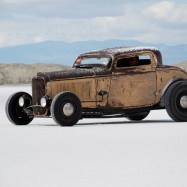 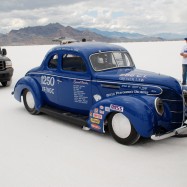 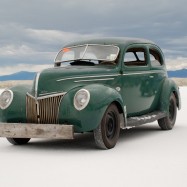 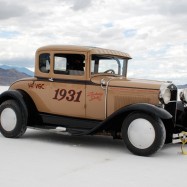 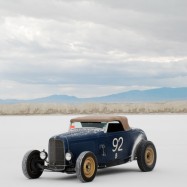 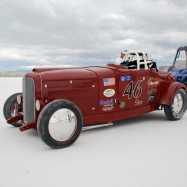 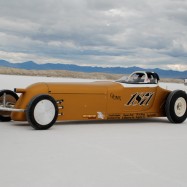 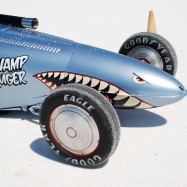 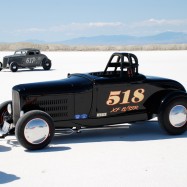 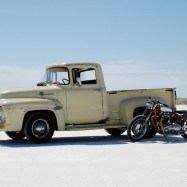 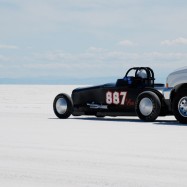 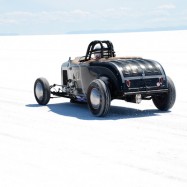 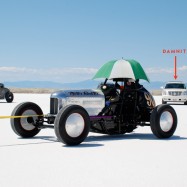 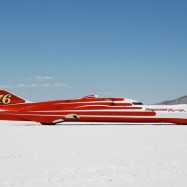 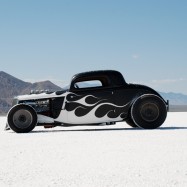 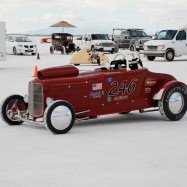 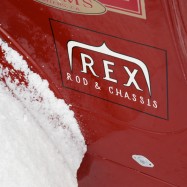 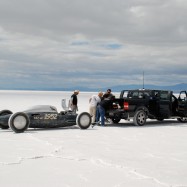 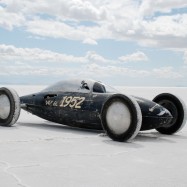 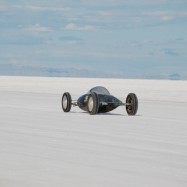