From Long Beach to the Lakes

Through the years, we’ve all seen a lot of hot rods. Tens of thousands? Hundreds of thousands? Who’s to say? That’s why when one stands out, it needs to really be something different. Well, when I was sifting through the H.A.M.B. earlier this week, I came across a car that most definitely fit the bill. Everything about it seemed familiar—like it was out of a Don Montgomery book or Genats’ The Birth of Hot Rodding—but I had a distinct feeling that I had never seen it before.

What drew me in? The aluminum bellypan. On a street roadster? Yes. The total package was perfect. With its red oxide primer body, solid hood sides with lunchbox latches, and filled Deuce shell, it checked all the boxes. The straight headlight bar and Firestone motorcycle tires were nice touches, too. After a little bit of digging, I pulled up some history from the owner, Muroc 29, out of Long Beach.

“Well, it’s been in the family since 1968. My dad first built it with a Pinto motor. Then, in the late ’80s we put an early flathead in it. Then, in about 1990 we put a fresh ’37 flathead in it with dual Strombergs and a mild cam. Then he decided he wanted to hide the ugly A frame. So, one of his best friends is an old hot rodder name Jack Underwood. He and my dad rolled pans in the driveway on torque tubes and angle iron. They finished it and turned out pretty nice. Just a little different from the common ’32 rails. It has a ’39 trans with Lincoln-Zephyr gears and a ’48 Ford rearend. The rear pan really gets a lot of attention. Resembles both looks and sound of an old boat.”

There’s a great deal of history rolled up in this car. The late Jack Underwood was a longtime SCTA historian who had extensive lakes and drag racing ties dating back to the 1940s. Seeing his metalwork on the car brought it to a whole different level.

Although I don’t know where the car is today, I was able to wrangle a handful of photos. It’s different, and I wouldn’t have it any other way. 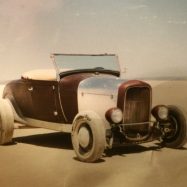 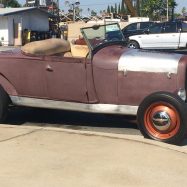 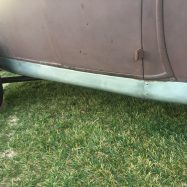 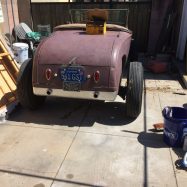 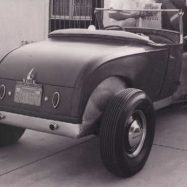