Posted by Jive-Bomber on April 28, 2022 and filed under: Customs

Ryan’s post yesterday about the 1955-56 Ford truck nameplates reminded me of the old ’56 Ford F100 I owned well over 20 years ago. It was nothing special or rare- A small rear window, straight six, 3-on-the-tree, short bed in a terrible metallic brown. Her nickname was ‘Uncle Jesse’, after the old man Jesse Duke’s rig on a certain TV show, even though my Ford looked nothing like his. On a sunny day in the park at Crusin’ Paso Robles in 1999, some talented kid who couldn’t have been more than 12 or 13 years old offered to lay out flames on the front fender with masking tape, just for kicks (Those spontaneous and rad things used to happen at Paso back then, but I digress). The tape shapes came out so good that I had the young man mask out flame licks all the way down each fender of the truck and proceeded to hand him all the pocket money I had. Back home, a buddy of mine hand-striped the line work out with One Shot, pinstriped the taillights, and threw a Flying Eyeball on the back, just for kicks. The ol’ F100 was still poop brown, but at least the black flames and white striping made it look halfway cool.

A very short while later, I met the girl who would become my wife. Right before our first actual date, I realized the truck had no seatbelts so I quickly ordered some JC Whitney ‘aircraft’ belts in poop beige and spent the night before our rendezvous installing them. We drove the F100 up to Petaluma in the rain, safely buckled in, wipers going side to side to the beat of the music playing the cab, just laughing and having the best time ever. Thanks Uncle Jesse. 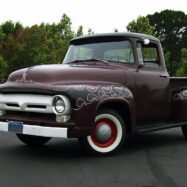 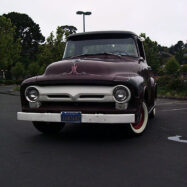 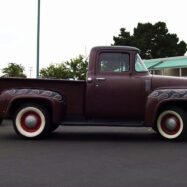 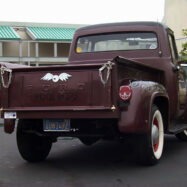