I’m heading to Los Angeles this weekend. Naturally, like any red-blooded hot rodder, I checked the local classifieds to see if I could find any treasure to bring back up north. It didn’t take long to dive into my usual searches via my usual means. Hot rod. Flathead. Model A. 1932 Ford. 32 Ford—you know how it goes. At this point, it’s almost become second nature.

As I worked my way through my list of keywords, I stumbled upon something familiar. “Hey,” I said to myself. “Isn’t that Squeak Bell’s 1932 Ford sedan?” Lo and behold, that’s exactly what I found tucked away in the depths of Los Angeles Craigslist.

The ad is a straightforward one. It covers all the crucial talking points, like the fact that the car has history dating back to 1954 and that it currently runs a heavily set back Buick nailhead backed by a three-speed trans. There’s no doubt that it has the look—and it has the performance to back it up too. The ad indicates that it will happily run mid-12s at 115mph.

If you’ve been around the nostalgia drag scene in the past 20 years, chances are that you know this car. I can still remember seeing it in the magazines. More often than not, it made its way into Bakersfield coverage. Maybe it was featured somewhere too? As a kid, I was impressed with the old highway signs-turned-interior panels. This had to have been the first place I’d ever seen that.

There’s a whole lot to like about this sedan. After checking out the ad, I started picking up on some of the neat details. I had never noticed the old chrome grille shell or the lightened Deuce frame. I remember the faded purple paint, but I was especially excited to see a shot of it in 1966, complete with chrome slot mags and an orange Plexiglas windshield. Looks like a purple relative of the “Orange Crate,” doesn’t it?

Even though I’m not on the market for a drag car at this point, I figured you would get a kick out of seeing Squeak’s sedan. I won’t be taking it home with me this time around. Will you?

Click here to see the CL ad. Also, does anyone know what Japanese publication the color photo is from? 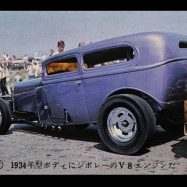 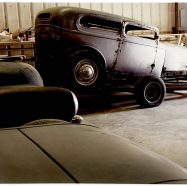 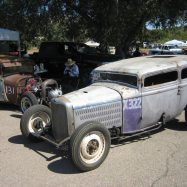 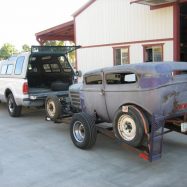