“Hey Ryan, saw you had something going down in Hawaii and thought I would share a story. In the late 1950s, typical office politics were starting to infiltrate Hot Rod Magazine. I don’t think it was anything nefarious, just the normal “my job can suck sometimes” things. My uncle was Ray Brock’s shoulder at the time and decided to host him for a couple of weeks on the islands – thinking the time away from the office would do him well.

While on Kauai, Ray and Jerry started dreaming about making the islands a sort of Hot Rod Headquarters. The islands were far more lax with road safety laws and far more eager to do things to support hot rodding. To get a track built on the mainland often required huge leaps of bureaucracy while on Oahu all you really had to do was ask nicely for permission to use an old runway.

The only real rational concern they addressed was the population base. I think they were too dreamed over by paradise to even consider the logistics of such a thing, buut as a proof of concept they helped put on a car show in Honolulu in 1963 or ’64. Control of that car show quickly faded, politics took over, and both Ray and my uncle returned to the grind of normal life on the mainland.

I have no idea what you are are doing out there, but this story felt related and I thought you might find it compelling. My advice? Don’t settle for the grind.”

Thankfully, I’ve never felt myself as being in a grind of any kind. That’s sort of the joy of working for yourself, doing your own thing, and being lucky enough that all this shit is my passion. I just do.

I loved this story though… and can 100% relate with both Terry and Ray. Further, in my research the other day I found proof of all this going down. First, the vacation: 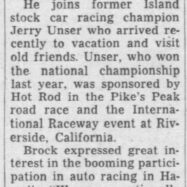 And then… as best we can tell, this is the show that Ray and Terry got involved with: 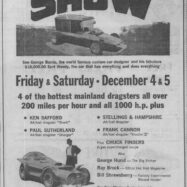 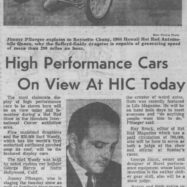 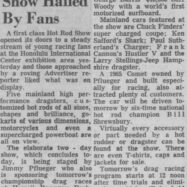 Given the folks involved with the show, it’s not hard to imagine how Ray and Terry got “muscled out.” And that just makes this story all the more fun to think about. Also… This was very definitely NOT “Hawaii’s first Hot Rod Show.”