I am most haunted by the cars I don’t know about. A good example of that is Bill Chambers’ 1949 Ford. As far as I know, it was only published once – in the September, 1951 issue of Hop Up Magazine. I’ve searched far and wide and have never been able to find anymore shots of the car or information about Bill.

In fact, the only query I’ve been able to get relevant results for through Google with both “Bill Chambers” and “1949 Ford” included is from a September, 1951 publication of the Audubon News Guide. In that newspaper, it states that a Bill Chambers was involved in a two-car accident in his “custom” 1949 Ford that resulted in injury.

Given that “Bill Chambers” is a pretty common name and that Audubon is a small town in Iowa, I think the chances that this was, in fact, our Bill is pretty low.

So… I figured I would query you guys. Anyone know anything about Bill or his bitchin’ little ’49? This is absolutely my kind of car and from that, I’d guess Bill was my kind of guy. 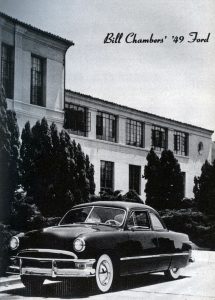