My wife and kids are on a road trip to Oklahoma. Bad timing, but she had a baby shower for our sister and… I stayed home to worry and watch over the home front. I started the weekend by watching the news, but quickly figured scientist were smarter than journalist and switched over to reading CDC/WHO reports. It didn’t take long for me to catch my fill and move on to something else – a tv series produced by Apple called “For All Mankind.”

I watched the entire series in one sitting, stopping only to refill my cocktail, eat, and piss. If you aren’t familiar, “For All Mankind” is a wonderfully made mockumentary covering the world as if America lost the space race. I highly recommend it.

One of the little details that the series doesn’t focus on, but does nail is that all of the astronauts drive Corvettes. They are featured in a handful of scenes and I am happy to report that the audio guys nailed the sound track on them. Big block Corvettes sound like big blocks, small blocks sound like small blocks, and the footage of the astronauts racing around Houston neighborhoods is absolutely perfect.

Watching it made me think back to the 6th grade. I was sitting in my classroom at Hillander Elementary in Midland, TX while Alan Shepard spoke to the class over CCTV about the merits of NASA and the challenges the program faced after the Space Shuttle disaster just a year earlier. Beforehand, we were all asked to write down questions for Admiral Shepard and were told that he would only answer a few, so make them good.

Me being me, I thought the most important question to ask the first man in space was what he drove to Johnson Space Center everyday. And to my surprise, he answered it:

“My first duty as an astronaut was to watch a test launch on the Cape. I drove from the north east down to Florida in my 1957 Corvette. And then, when I got back from my first mission in space, Chevrolet gave me a  another. I’ve been driving them ever since. I’m a Corvette man.”

I’m sure this response was some sort of a canned answer that Shepard was paid to give, but it hit me like a Tyson cross all the same. I distinctly remember asking my dad for a Corvette poster after class that day and Corvettes are still one of the first things to cross my mind whenever I think about NASA, the space race, and the golden era of exploration.

I figured I would end this feature with a gallery of Shepard’s ’57, but I couldn’t find any shots of it at all. I found lots of quotes similar to my own and plenty of shots of the ’62 that Chevrolet gave him after his mission, but I’m guessing his first Corvette is lost to time – probably belonging to someone that has no idea of the car’s history. 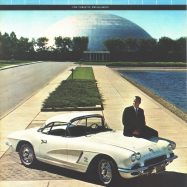 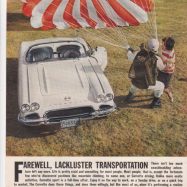 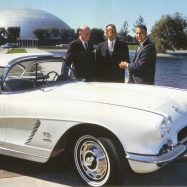