Posted by J.Ukrop on January 24, 2020 and filed under: Event Coverage

Six years ago, I submitted a story about the Grand National Roadster Show for my weekly Jalopy Journal entry. In retrospect, it was particularly inspired, with characters, setting, a plot and a handful of images that I had collected from the show’s formative years. For the time being, it worked. I only knew of GNRS in theory. I hadn’t ever spent much time in Southern California, and I had never seen the nine-foot behemoth of a trophy in person. Pictures were what I had, so pictures were what I worked with. It was as simple as that.

Times change. As I write this, I’m sitting in a 24-hour diner on the outskirts of Los Angeles. It’s decked out for Valentine’s Day with dollar-store balloons, and I’m listening to the couple across the room discuss their 50 years of marriage. When the husband leaves the table, the wife orders him six pieces of bacon. The waitress gives them a $2 discount. From my outpost in corner booth #29, I smile.

Fourteen hours earlier, I was just leaving my home in San Francisco. I spent the day on the road, passing, being passed and thinking about what the weekend had in store. It wasn’t until the traffic broke free on the 210 Freeway that my heart began to race. The sun was starting to set and, as the Doors’ “LA Woman” belted through my speakers, a rush of warm Southern California air swirled around me. At that moment, I had a feeling that I was about to witness something big in Pomona.

When I walked onto the fairgrounds, I discovered that hunch wasn’t wrong. The WPA-era buildings were full of all sorts of hot rods, customs and every type of vintage machine imaginable. Roadsters here, dragsters there and more flatheads and Hemis than I had ever seen before. Throughout the afternoon and into the evening, I shot photos, caught up with friends and ate cake while surrounded by front-engined dragsters. I was on assignment for The Rodder’s Journal, and I was posting to our Instagram every step of the way. (You can check it out here if you’d like).

Best of all, the show hasn’t even officially started. To commemorate six years since my first GNRS post, I figured I would share six noteworthy snapshots from set-up day. Feel free to add your own! 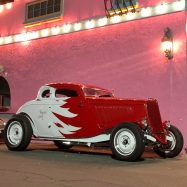 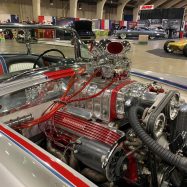 What powers the “Moon Rocket?” This. 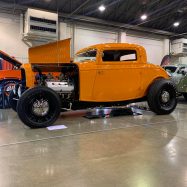 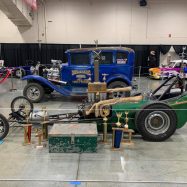 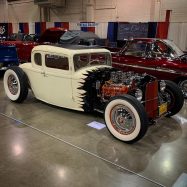