While searching the classifieds, I’ve noticed that roadster pickups are some of the most reasonably priced early Fords. That makes sense, really, considering they’re not much more than a bucket with doors and a box on the back. They’re compact, useful, topless, and their construction looks pretty straightforward. Best of all, there are plenty of excellent examples from hot rodding’s past to pluck inspiration from. Case in point: Les Erben’s Model A.

Back in the early-’60s, Les was living in Santa Clara, California, and felt the itch to build an early Ford hot rod. Rather than going the coupe or sedan route, he opted for a ’29 Ford pickup. So where to start? In the chassis department, Les used the stock A frame and brought down the nose with a dropped front axle. Out back, he went with a ’50 Merc rear suspended by a chromed Model A spring. Other dress up items included a finned differential cover and some sort of ribs on the axle. (I’ve never seen anything like this, have you?)

For the powerplant, Les jumped on the opportunity to run an Oldsmobile V8. The internals remained stock, although he did bolt on a trio of Strombergs for a classy combination of show and go. Finned valve covers and a custom chromed firewall garnered extra show points, while the upswept lakes headers must have riled up the neighbors when they were uncorked. Power was transferred through a ’39 Ford trans with Zephyr gears.

Inside the cockpit, the seats were trimmed in velvet and Naugahyde by the team at Raes Top Shop. On the dash, Les loaded an Auburn insert with Stewart-Warner instrumentation. To keep the truck between the lines, he installed a ’60 Olds steering wheel on a ribbed column.

There’s a whole lot to like about this A, but I was immediately drawn to Joe Wilhelm-applied black lacquer and the Buick Skylark wires. Skylarks are making a comeback in the modern-day customizing scene, and I would love to see them find their way on to more ’60s style hot rods. Pair them with narrow whitewalls, and you’ve got yourself a traditional combo that’s hard to beat.

When it was all said and done, Les’s Model A checked all the boxes. It was a Sweepstakes winner everywhere from Oakland to Modesto, and it was no slouch on the streets either. It’s an immaculate truck, and it makes me want to keep looking through the classifieds in search of a hauler. Who knows? Maybe it’ll end up half as nice as Les Erben’s Model A. 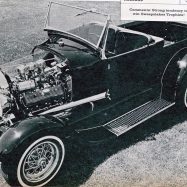 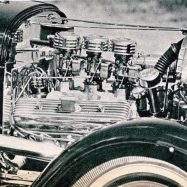 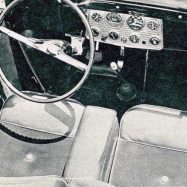 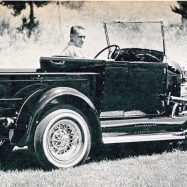