Posted by Ryan on September 5, 2006 and filed under: Feature Articles, Hot Rods 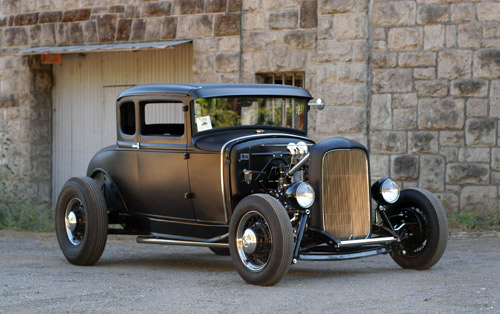 While strolling through the Paso Robles town square during the 2000 show, I stumbled upon a perfect late 40’s styled hot rod roadster. It was a perceivably simple car that made its mark with flawless craftsmanship and subtle little tricks here and there. I fell in love instantaneously and spent the next hour studying the details. After speaking briefly with the owner, I discovered the car was built by Keith Tardel. A mental note was taken along with several pictures and I moved on.

A few months later, I got an email from Mary McCabe. Her boyfriend, Keith Tardel, was building his own shop and needed a website. I jumped on the opportunity and quickly arranged for a chassis to be built for my Chris Ito designed salt car. I wanted a heavily chopped and channeled Model-A coupe backed by a small block Chevy and a 4-speed. Keith agreed and patiently listened to all of my requests. 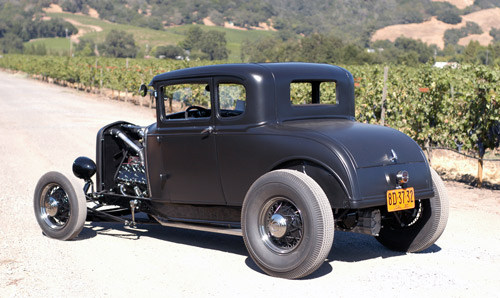 Meanwhile, Mary and I began working on the Rex Rod & Chassis site. In doing so, we got to be buddies of sorts and when it was time for Keith and Mary to tie the knot, I drug my then girlfriend (Marcie) to Santa Rosa for the event. We awkwardly showed up as “internet pals”, but Mary and Keith went out of their way to make us feel comfortable. A real friendship was formed.

As the years went by, the Tardels and the Cochrans got closer. Together we did more weddings, vacations, and car shows. All along the way Keith and I seemingly kept tune on my coupe project.

What if we did a flathead instead of a small block?

What if we slanted the a-pillars?

What if we painted it a dark/vintage red? 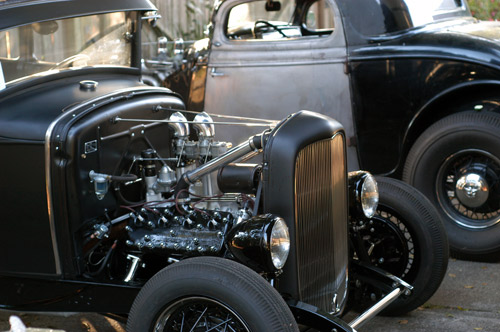 As we walked through events like the Oakland Roadster show and various Lonestar Roundups, we would discuss the cars we liked and those we didn’t. Little did I know, Keith was doing more than just bench racing. He was taking notes and building a car in his head that would one day be mine. He knew what I didn’t.

Still, the coupe was very much in the background for me. The Tardels were no longer friends of ours – they were family and I was much more focused on seeing Keith and Rex Rod & Chassis do well than actually having a coupe built. It was just more important to us for Keith and Mary to have the resources to hang out in Hawaii or fly to OKC to be our baby’s god parents. Who gives a shit about a hot rod when you have other much more important priorities?

Mary and I always joked about “changing the paradigm”, but in reality the Hot Rod Revolution was just another excuse for us all to get together. Following the H.A.M.B. Drags, I had no grand expectations for this weekend. I just figured Keith and I would sit around and stare at cars while Mary and Marcie drank cocktails. I had no idea what was in store for me.

When Keith opened up his garage late Thursday night, I was punched right in the eyes by an amazing Model-A coupe. What I assumed was his latest client car was a grand vision of what I always thought of when dreaming about a 40’s era hot rod. Simple and subtle, but sans anything that could be qualified as cute… Dark, purposeful, and amazingly detailed… It looked like a brand new war machine ready for deployment. 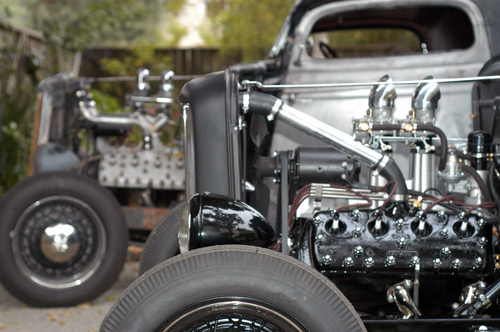 After Keith told me to read the show slip on the front glass, I just sort of lost it. I couldn’t comprehend my own name. I couldn’t rationalize how this car could be mine. After numerous confirmations from Keith, Mary, and Marcie I finally believed my eyes. My first reaction was an emotional one. I wanted to cry… toss my hands up in the air and just kind of give up. There is no way that I can communicate that kind of a feeling. It’s surprise, it’s shock, it’s just… Indescribable.

Somehow these people expected me to be able to sleep after the unveiling. I didn’t. At around 4am I gave up all efforts to keep my eyes closed and went outside to study the car. Every time I looked at it I found some new little detail that must have taken Keith hours upon hours to integrate. When the sun came up and Keith had his coffee, I was finally able to hear it run. When you hit the starter, this car more erupts than it does ignite. It’s loud and the “secret” cam grind is lumpy. This coupe sounds the part.

Driving the car is just as impressive. There are no squeaks or rattles. The steering is tight as a drum. The brakes are solid. And that exhaust note… It’s like music. Put simply, this is a brand new hot rod and it drives like one. Perfect in every conceivable way.

It wasn’t till we were at the show on Saturday that I realized that this car was actually a pretty distant relative to the car Keith and I had originally discussed. Hell,  not a single part that I sent Keith is on the car – not even the body! It’s hard for me to imagine how Keith was able to build my dream car with little to no literal direction from me, but he did. My only conclusion is that Keith was actually taking notes at all those car shows we attended together. He was able to subtract my frivolous notions from my passions and build a car that suited the person he knew. Again, he knew what I didn’t… and the result is a car that I will own for the rest of my life.

There are very few people in this world that I would feel comfortable being so in debt to. This car really has nothing to do with the Tardel/Cochran relationship. We are family and family is a life thing…  As excited as I am to get the car home to Texas, I’m just as excited to hang out with Keith and Mary again… Hot Rods really can do some pretty amazing things.

Special Thanks: Upon showing the car, Keith was quick to point out that he couldn’t have built it without a ton of help from some of his pals, namely Ed and Billy… Thanks so much fellas. It’s hard to imagine doing so much for a guy you don’t even know. I won’t forget it! 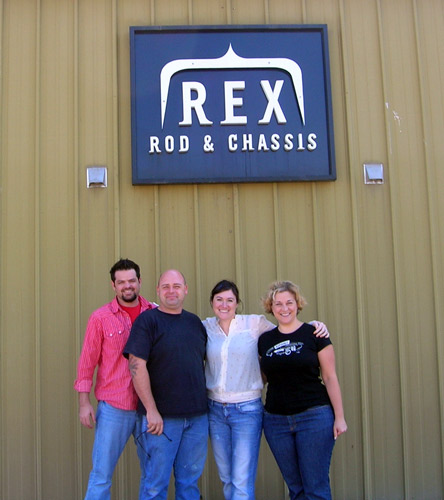