Posted by Ryan on September 19, 2018 and filed under: Feature Articles

This article originally ran in The Jalopy Journal #2… We still have some of these available and you can get yours here.

Back in 2009, Johnny Joyo and I took our first trip to the Bonneville Nationals. We were there for four days and four nights foaming at the mouth and chasing our tales in an impotent rage of sorts. It was a thread of life full of high and wild dreams that somehow became reality. We were on the salt and neither of us could believe it.

At some point, we figured, we would have to come down from this naturally induced high. We picked our last night to do it manually. Joyo and I hooked up with brother Tardel in the hotel bar and took up a drinking battle of will with anyone that would challenge us. It was self destructive for sure, but there was a definite satisfaction knowing that, even if we lost, whoever beat us would never get rid of the scars.

Joyo was smart. He bailed out early and left Tardel and I to our childish game of booze battling. I turned in at 4am – just in time to get two hours of sleep before our 6am meeting time. The plan was to hit the salt one last time before our flight out that same day.

As you might imagine, Joyo showed up bright. Cheery even. I, on the other hand, was walking dead. I spent much of the morning staring off into the distance contemplating just how in the hell this trip had turned into a real-to-life Gonzo piece. I still haven’t summoned up the reasoning behind it all, but it lead to something beautiful.

As Joyo and I were driving off the salt and heading to the airport, we spotted the ’34 coupe you see before you here. We immediately pulled over and started to shoot the car as the owner and his buddies approached us from behind. They seemed friendly enough, but I did notice a weary air about them – especially towards me as I fought hard to hide my battle wounds from the night before.

The mid afternoon Bonneville light was harsh and the background of our impromptu shoot could have been better. I asked the owner of the car if he would be willing to move it further out on the salt so that we could really get down to business.

“Who are you with? What IS your business?”

I had never really been asked that while casually shooting a car and didn’t know how to respond, so I just said the first thing that came to my handicapped mind. “I’m Ryan Cochran. I’m with the finest Hot Rod publication in all the world – The Jalopy Journal.”

One of his buddies suspiciously whispered him to ask for my business card and he quickly obliged. Of course, I’ve never taken myself seriously enough to carry a business card and now here I was, being judged for that miscalculation. Thankfully, Joyo was gifted with great composure and was able to put the fellas at ease.

The shoot went off without a hitch after we finished the awkward introductions. We got the car moved, we shot it, and Joyo even went for a hair raising ride around the Bonneville pits.

It’s now three years later. Thinking back, I’m pretty sure I told the owner of this great little Hot Rod that his car would be featured in a new print magazine within the next six months or so. By now, I’m sure he’s written me off as some kind of a delinquent with a total lack of shit togetherness. He wouldn’t be too far from the truth.

Somehow, I failed to get the owner’s name. As press time approached, Joyo was nice enough to do some investigation work. He found the name that escaped me three years earlier.

Dave Mehelich, thanks for letting me shoot your car. I can only hope that I spelled your name right. 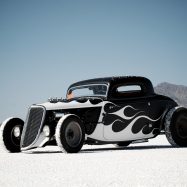 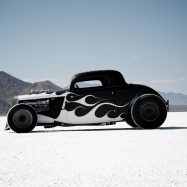 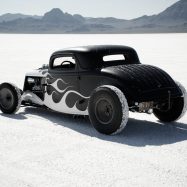 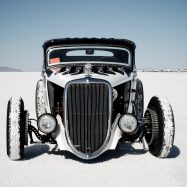 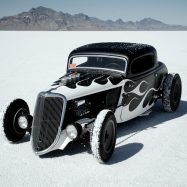 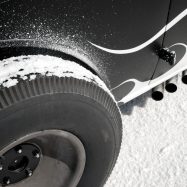 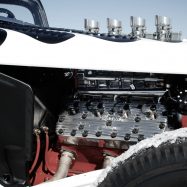 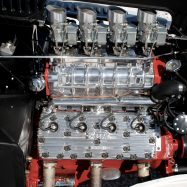 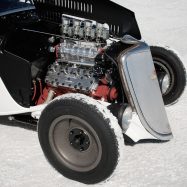 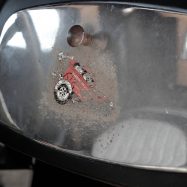