The Story Of Tommy Lee

Posted by Ron Kellogg on January 13, 2010 and filed under: Feature Articles, Folks

The month of January, 2010 is a great place to start with a fellow that most of you have heard about – Thomas Lee, better known as Tommy Lee. At the age of 28 in 1934, Tommy inherited seven Cadillac dealerships (and a ton of other property) from his father – Don Lee. Don was known to play as hard as he worked and he did so with incredible vigor. He called many a Hollywood celebrity a friend and spent a lot of time playing with race cars, hot rods, and customs.

Don’s deal with Cadillac was fantastic. Essentially, he got a cut off every Cadillac sold in California. So when the time came for Tommy to take over, he had it made – huge wealth, a good Cadillac deal to keep that wealth, and a number of good folks to help show him the way. His head body man was none other than Mr. Frank Kurtis.

Of course, Frank wasn’t around long. His talents lead him to open his own shop, but that didn’t sever the relationship between Tommy and Frank. In fact, in 1936 Tommy approached Frank with a project. He wanted the best looking and fastest hot rod in Southern California… and he wanted Frank to build it.

Frank thought the Cord was a smart look and Tommy agreed. Frank felt a Cad motor would be appropriate, but Tommy balked. He wanted the best of the best and that meant this car was going to get a 318-inch Offy. A direction was set and work began.

Frank started with a 1936 Ford chassis and Cord front and rear fenders. From there, the car just blossomed into something VERY unique and VERY fast. In fact, the car was so unique that it caught the eye of one Geo Duvall Jr. On November 5, 1937, Geo put pen to paper and illustrated the car. Today marks the first time that illustration has ever been published.

As most of you know, Tommy’s roadster ran on the dry lakes of Southern California with limited success. Improvements might have been made and potential realized if not for a tragedy that happened just prior to the war. On an intersection in Hollywood, CA, Tommy was t-boned by a truck and he was badly injured.

Tommy lived the rest of his life in a great deal of pain. He tried to play through and continued buying a number of hot rods and race cars as well as a few fighter planes (p38). But the joy of speed just wasn’t enough to overcome the pain.

On January 13, 1950, Tommy had his driver take him to the dentist. He got on the elevator and went to the 12th floor roof. He then jumped to his death leaving behind a 10 million dollar fortune, a huge automobile and aircraft collection, a radio station, and a television business. His uncle inherited most of the assets, but Willet Brown was able to secure all of the cars.

Over time, the collection and parts from it were sold off. I was able to obtain a set of M/B W163 wheels and starter from the collection, but as soon as M/B heard I was in possession of them, they made me an offer I couldn’t refuse. However, I’m still the lucky owner of the 1935 Miller/Ford intake from the collection. It looks grand in my office.

I hope you enjoy the included photos… Many of them have never before been published. I love it all and know you will feel the same. May 2010 be one of your best! 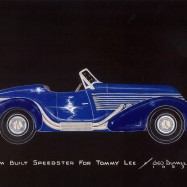 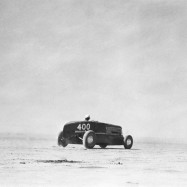 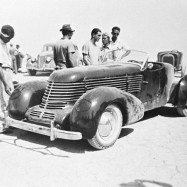 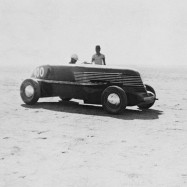 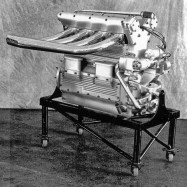 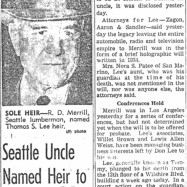 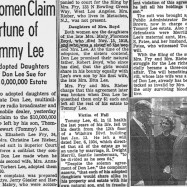 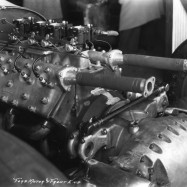 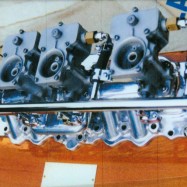