Posted by Ron Kellogg on December 9, 2009 and filed under: Feature Articles

After last month’s article about Dean’s B-17 adventure during WWII, I decided it might be appropriate to take a more in depth view of Dean as a hot rodder, streamliner builder, and driver. There’s a lot to Dean, so hang with me here and enjoy the ride. You will certainly be glad you did.

Dean’s good friend, Alex Xydias, had the famous Bill Burke belly tank as well as a V8-60 tank that held the “A Streamliner” class record at 130.15 mph. At the time, Dean was daily driving his ’32 roadster and still seeing trap speeds of 126.155 mph. Both men dreamed of faster cars and realized the potential in both horsepower gains and further streamlining.

With So-Cal Speedshop, Alex had the capability to source both parts and talent while Dean had his Industrial Design degree from the Chouinard Art Institute that could be put to invaluable design use. The two made a perfect pair and decided to partner on the construction of a streamliner.

Dean sold his roadster to fund the project and quickly got to work on the design process. He put pencil to paper and his good friends, Neil Emory and Clyton Jensen of Valley Customs, took those designs and ran with aluminum. Having never worked with the material, they encountered many problems, but they persevered and had the car ready in early 1949. Before heading to the inaugural event at Bonneville, Dean and Alex did some test runs and saw speeds just north of 135 mph using a V8-60 for power. They were confident they were on the right track, but their pals weren’t so sure…

“Where are the wheels? Shouldn’t they be out in the air?”

“That design is all wrong. The body should be narrower.”

“Jeeez fellas, don’t you know that thing is gonna take off?”

“I sure wouldn’t drive that thing.”

After the initial test, Dean did decide to make one change – skirts were added to all four wheels to further slip the design. And then Vic Edelbrock got involved… He mentioned that he happened to have a hopped up Merc motor laying around and that interchanging the two power plants would be simple. In fact, Dean and Alex could run the v8-60 in morning sessions, quickly replace it with the Merc, and make more passes during the late afternoon sessions. The v8-60 was good for 110 horsepower while the Merc was almost double that.

The morning session was promising. The little V8-60 pushed the streamliner to 154.90 mph. Many of the guys in the pits snickered and figured the little car had hit a wall. Many didn’t think the Merc would push it much faster. They were wrong. Dean put his foot in it and the Merc motor pushed the streamliner to 185.95 mph – more than 20 mph faster than any Hot Rod had ever run on the dry lakes in competition. So fast, in fact, that when Phyllis Lindsley called the timers for a speed, he was put on hold. Dean had ran so fast that he was literally off the charts and his time had to be calculated by hand.

And then May 7th happened. Dean would later say that he should have known better. His first pass was with a light cross wind and things went fine. However, the wind picked up on his return run. Figuring the worst that could happen is that he might miss a timing light, Dean pushed on. That’s the last thought Dean remembered. The car turned left on the course, barrel rolled, and landed on all fours. Dean’s helmet came up over his head and his chin strap took most of the skin from his eyebrow all the way to the back of his head. He would be unconscious for over 6 hours.

Amazingly, the car wasn’t hurt too bad and was quickly repaired. However, it had had it’s chance to kill Dean and wouldn’t get another opportunity – Dean hung it up and made way for Bill Dailey to take over as driver. In 1950, Bill drove the car to a 2-way average of 208.927 mph.

The following year (1951), Bill France of NASCAR fame invited the crew to run the car at Daytona. With the help of Hot Rod Magazine and a few others, the crew packed up and headed East. At the time, Dean was working at Lockeed and couldn’t take the time off work.

The other boys should have stayed at home as well. The event ended with a terrible accident that ruined car and almost killed the driver. Looking at the remains of the car, it was amazing that Bill was able to walk away with only a broken collar bone.

There ya have it… Dean Batchelor’s streamliner story.

I am kind of old fashioned, so my friends – Have a Great Christmas and Happy New Year! 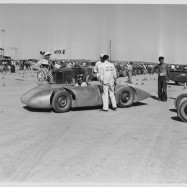 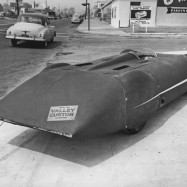 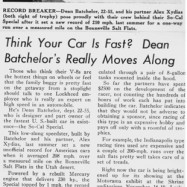 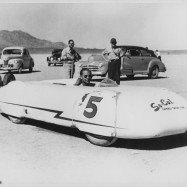 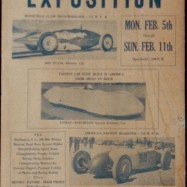 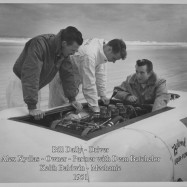 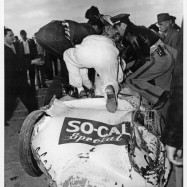 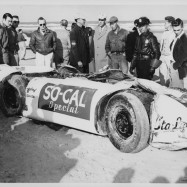