Posted by J.Ukrop on December 2, 2022 and filed under: Art & Inspiration, Hot Rods

It’s December, and things are already getting wild. End-of-year deadlines are looming. My roadster is in pieces. Even though it’s stressful at times, I think things are coming together. On Thursday, I’m leaving for Southern California for The Race of Gentlemen. With any luck, I’ll be racing my car, covering the event and helping my friend Yama run his 1942 Harley Flathead. Sounds like a full weekend, doesn’t it?

A few days ago, he and I were talking about number plates for his bike. We bounced a few ideas back and forth, and he eventually hit me with the question I wanted to hear. “Would you like to paint them for me?” My answer was a resounding “Yes!” As soon as I got the job, the wheels started turning.

Well, that’s not completely true. I’ve had racecar lettering on the mind for the past couple of weeks. When I saw photos of his bike and its color scheme, I immediately thought back to a favorite car of mine from my early H.A.M.B. days. What was it? “The Golden Greek,” a 1940 Willys Gasser.

Back in 2009, gldngreekc/gas posted this:

Now that I spent a year of just looking at it, I was wondering if any fellow HAMBers could help me out with any pictures or info you might have on this car that was run mid-Atlantic states from ’60ish to 1966 when it was put away after the owner passed away. The car is basically just as it was when parked in the garage back in ’66 (tires of course are new) and the car was run by a guy named Gus Pappas. Although I have gathered up bits and pieces of the car’s history, I still haven’t been able to find any action pics from the racetrack. Anyone out there got any?

Even though it’s been 13 years since I last visited that thread, the paint job has stuck with me. The candy gold, the gold leaf lettering and, best of all, the Drag News-style starbursts. 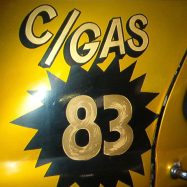 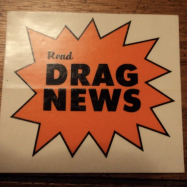 I’m planning to use elements of this design on Yama’s bike this weekend/next week.

All that aside, I can’t believe how much the thread has developed in the past decade. Even though the original poster has left the building, we get a whole lot of answers. The tale of the Golden Greek is a bittersweet one. If you’d like, you can get the full story here.

I’ll let you know how the paint project progresses. And for those of you heading to the drags next weekend, I’ll see you there! 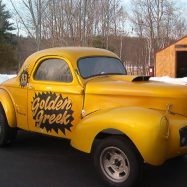 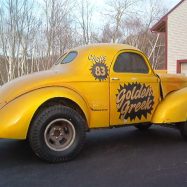 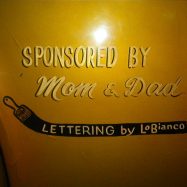 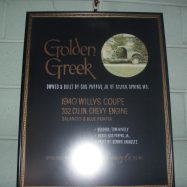