Posted by Ryan on November 16, 2022 and filed under: Customs, History

In the early 1960’s, Ronnie Knepp was rear ended in his 1950 Chevrolet. Rather than rebuild the car to stock, Ronnie decided to have Stuckey Kustom in Wichita, Kansas do their thing. The result was a very simple custom with a striking rear-end treatment.

I mean… look at this damn thing. From the front, it’s just a clean and simple example of an early Chevrolet. But from the ass end? It’s a Bill Mitchell inspired knife that cuts right through the rear fenders and into splash apron – leaving you wondering where the rest of the Corvette went.

And I absolutely love the asymmetrical taillights balanced by the passenger side “wedge” that cuts through the cleanly shaven deck lid. It’s all just so damned sculpted and unexpected that it’s hard not to fall into a trance studying it all. And then your eye gets past those rear fenders and the bewilderment just stops. The rest is all generic and Detroit.

Ronnie’s car was eventually finished with square headlights and an oddly pancaked hood. I don’t have any shots of this later version, but rest assured – it was Corvette inspired as well, but just not quite as well thought out.

This initial version is a kin to a blank canvas of sorts… You have a direction to work towards given the rear-end treatment, but the possibilities moving forward are endless. I love that. 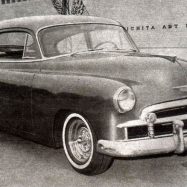 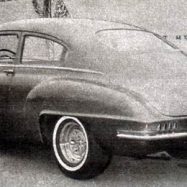 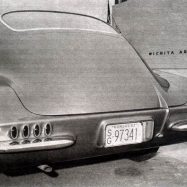