The Best That Never Was

Earlier in the week, I featured livery designs on American race cars. While digging through images looking for examples, I stumbled upon a car that I had forgotten about – the 1955 Indy Car Streamliner.

The story starts in the early 50’s. Bill Vukovich won the Indy 500 in 1953 and 1954. In an effort to make it three in row, Bill contacted Howard Keck (legendary financier) and asked him to fund a car that couldn’t be beaten.

Howard agreed and contacted a famous group of innovators known as the “Indy Whiz Kids” to do the job. Quinn Epperly lead a group staffed by Jim Travers and Frank Coons. These guys would later go on to form Traco Racing, but before that? They set out to build the lightest, most aerodynamic, and fastest roadster to ever go around the Indianapolis track.

The build started with inspiration gathered from the speed efforts of pre-war German manufacturers like Auto Union and Mercedes. The Germans set astronomical speed records with far less power than the Whiz Kids had on tap, so a marriage in principals seemed like a winner.

This amount of innovation, however, takes time… And by the time the 1955 Indianapolis 500 rolled around, the crew only had a rolling chassis. There wasn’t time to install the Offy motor and test the setup before the race, so Vukovich landed a seat with another team – figuring 1956 would be the year of the streamliner.

Sadly, Vuko was involved in an accident during the ’55 Indianapolis 500 and died of his injuries. As a result, Howard Keck lost his stomach for speed and stopped writing checks for the streamliner. The project was shelved indefinitely and the innovations within all but forgotten.

If you look back at the car now, it’s easy to see that it was far before its time. While it still featured solid axle construction, the chassis was incredibly light and the crew focused hard on the distribution of weight the car did carry. Locating the motor midway between the axles allowed the streamliner body to sit low and the center of gravity to be perfected.

But Indy engineering can get complicated quickly. Shooting down the straight at 170mph in 1955 is one thing, but getting the car to hit the apex between turn one and two is an entirely different matter – slippery fast objects tend to go straight, not turn. The Whiz kids, however, had an answer for that. They built an “elevator” along the rear leading edge of the car that the driver could use to actively add downforce when needed. Had the car ran in 1955, it would have been the first to feature active aero.

Of course, it didn’t… and it wasn’t… While Keck did stop financing the project, he couldn’t bring himself to sell it off. Instead, he kept the incomplete car in storage for over thirty years. Eventually, a collector named Jimmy Dobbs talked him out of it and did a full restoration to the original design.

To me though… the craziest part of this story is that the car eventually sold again at auction in April of 2018. The price? $35k. Unbelievable. In 2019, the car sold again… This time, it fetched a price north of $375k. 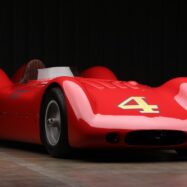 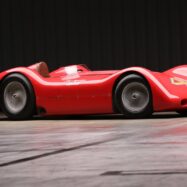 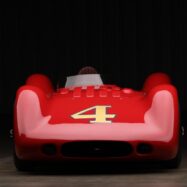