In the winter of 2013, I wrote one of my most controversial Jalopy Journal columns. The subject? “Match Bash” Funny Cars. I was still relatively new to my Friday slot, and I remember writing and re-writing the piece to make sure it had the right voice. I wanted to capture the ragged, out-of-control nature of those fire-breathing door-slammers. I wanted to bring the unbridled, unhinged excitement of heads-up match racing to the page in a way I had never done before. Much like the cars themselves, the post was an experiment. Here’s an excerpt.

“Match Bash. A phrase that sounds best when yelled. You see, Match Bash wasn’t for the rule followers. It wasn’t for the tape measure jockeys in white coveralls, and it certainly wasn’t for the faint of heart. Think cobbled, flimsy metal shells held together by strands of hope and wishful thinking. Wavy fiberglass doors and decklids intertwined with acid-dipped shells to create collages much like an AMT kit built by a kid who went a little heavy on the glue. Moon tanks, beam axles, magnesium wheels and meaty slicks. Match Bash is what kids dreamt of and fathers denounced.”

What was it that made the article so controversial? Terminology. Somewhere in the comments, a reader mentioned that the cars weren’t called “Match Bash” in the 1960s. He said it was a modern moniker used to describe AWB tribute cars. Prior to posting, I did my research and I knew Match Bash was correct.

Before I was able to fire back, the mighty H.A.M.B. historians came to my defense. My friend Kip Hansberry, who I met at the Meltdown Drags a lifetime ago, went as far as to dig up a magazine article from the mid-’60s that mentioned Match Bash by name. That meant a lot to me then, and it still does nearly a decade later.

Looking back, that article is an artifact of another place in time. In those days, my automotive interests revolved around altered wheelbase cars, Gassers, and just about anything with a straight axle and piecrust slicks. I dreamt of building an AWB car for the street, even though I had no money, no garage and no skills to speak of. That didn’t matter. I knew what I wanted and I wasn’t going to let anything stop me.

Though the years, I’ve drifted away from my altered wheelbase dreams. I’m a little bit older now and, like many of you, I’m fascinated by early Fords. It’s a testament to our hobby—and the H.A.M.B. in particular—that everything from flathead-powered roadsters to nitro-burning Funny Cars fall under the traditional umbrella. It’s an amazing place to be. I’m not sure of any better way to say it.

Last month, the swap meet in Petaluma was winding down. It had been a long day, and I was mentally preparing to load up the truck and head home. As I planned my next move, our friend Gus came by and said he had something for me. “I have a whole lot of magazines that I wanted to give to you,” he said. “It’s mostly later, and a lot of it is East Coast-based.” My answer? Yes!

Flipping through the magazines was a trip back to 2013. Gassers, Altereds, dragsters, wheelstanders—they were all there in grayscale and living color. Since then, I’ve been slowly going through each issue and savoring every page. I’m still near the top of the stack, but I pulled a standout issue to share here: Popular Hot Rodding, October 1966.

This issue packs a punch. It’s filled with high-performance perfection. The cover is one of my all-time favorites. It’s so simple and says so much. Oh, and that Falcon is spot-on. Inside, you’ll find articles on some heavy hitting cars. You know, big name stuff. “The Flying Dutchman,” “King Fish,” “UFO,” “Hemi-a-Go-Go.” As neat as they are, I’m drawn to the Falcon cover car and the red AWB Chevy II. Both are homegrown Midwestern machines that were on the cutting edge.

The best part? The lack of lettering and crazy proportions, both of which make them look more like model car box art rather than actual cars. They’re wild. They’re weird, and I appreciate them for what they are.

Photos from Popular Hot Rodding, October 1966. Zoom in to read Tom McMullen discuss “Discotheque” music, among other things. For more Funny Car fun, make sure to check out the picture thread here. 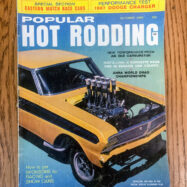 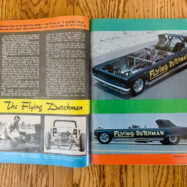 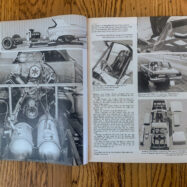 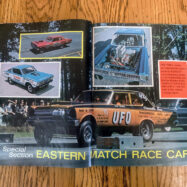 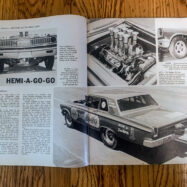 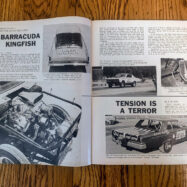 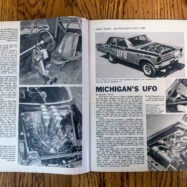 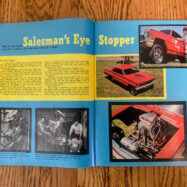 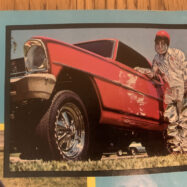 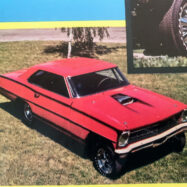 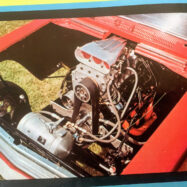 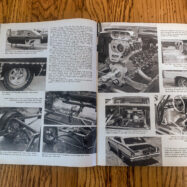 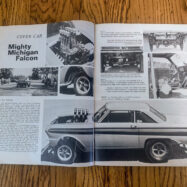