Falling In and Out of Love

Posted by Jive-Bomber on June 1, 2022 and filed under: Art & Inspiration

We’re an eclectic bunch of car folks, aren’t we? Fascinated by a roughly 20 year window of car modifying in American history. We dig everything from the pre-war tail dragger, to the post-war hot rod, the 50s Kustom, and the early 60s drag car, with lots of other stuff sprinkled in for good measure. We pine for the simplicity and style of these vehicles built somewhere roughly between 1925 and 1965, and the potential to make them look better and go faster than the blessed manufacturers ever imagined. We keep lists of the old automobiles that we lust after. Those White Whales that we’d consider selling everything else just to park in our garage.

But what happens when we actually get that holy grail, bucket list car, only to fall out of love with it some time later? Why does that even happen? You know the one I’m talking about: Deep down you’d probably hate selling her, but in all honesty it’s also the last car you would take out of the garage if given the choice. Will you regret it if you sell this car that took you so long to get? Will you just wanna buy it back again immediately after? Maybe it won’t really hit your heart till you see the taillights and all those memories drive off in the distance with a freshly-released title.

Or just maybe, with a pocket full of new money, you immediately start the search for the next love of your life….

(image from the Albert Drake book Flat Out) 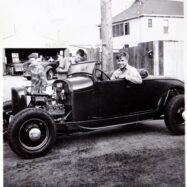