In 1955, there was a terrible accident at Le Mans that ended with the death of 77 spectators and injuries to many more. As a result, the Automobile Manufacturers Association forbid Detroit from participating in any performance or motorsports activities. There would be no factory racing and there would be no performance oriented products from Detroit. Period.

Shortly afterward, the execs at GM told Bill Mitchell that the Corvette program was shelved and that he needed to start working on more practical designs. Bill was having none of it. And instead, he got to work building a secret performance studio located within a basement backroom called “Research B”and staffed by a group of young and hungry designers.

The goal? To continue development of the Corvette and other performance projects away from the prying eyes of GM accountants, lawyers, and big wigs.

As you can imagine, this setup created a lot of energy. It wasn’t long before designers were spitting out ideas and illustrations of speed that showed true promise. And so, it wasn’t long before they needed space to actually concept this stuff. Bill hired a contractor sworn to secrecy and then got busy managing the construction of Studio X – hidden behind false walls, double locked doors, and the kind of security that is unimaginable for 1957.

Roy Lonberger, a designer at the time, remembered the studio as being around 40′ long by 15′ wide with a platform for a car, two drawing tables, and a small cabinet for a coffee maker and a phone.

“Adjacent to the platform was the drafting wall, where the full-size lofting drawing was created and sometimes used to pin sketches,” Lonberger said. “The opposite wall, also a sketch-display wall, consisted of folding doors and curtains that had to be opened whenever a model was removed. The ceiling was low, maybe 7 or 8 feet. Nothing glamorous, very claustrophobic, and a rather depressing place to work.”

Mitchell went on to say that designing in Studio X was like trying to play a trombone in a phone booth. Even so, it was this tiny studio where the American Sports Car was really born. Their first effort was Mitchell’s XP-87 – a project that had to be snuck into the studio at night after the performance ban. Mitchell largely funded it himself and by 1959, Dick Thompson was racing the car at SCCA events. There was no badging at all on the car other than a tiny a chrome script that read, “Stingray.”

We know the rest of the story… The “Stingray” dominated and eventually inspired the 1963 Corvette Stingray production car. We also know that eventually the performance ban was lifted and Bill Mitchell proved to be the most important automotive designer in history – creating countless secret studios and finishing just as many secret projects along the way.

But, this clandestine era of performance was born in Studio X and I’ve always been fascinated by seeing photos of the setup. Obviously, Bill wasn’t huge on allowing cameras in the joint so it’s rare to catch a glimpse. Through the years, I’ve collected only a very few photos that were supposedly taken within the studio. I’ve never been able to verify them or find more. 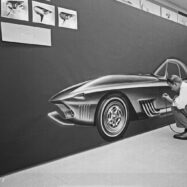 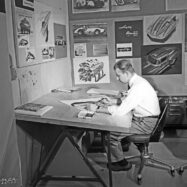 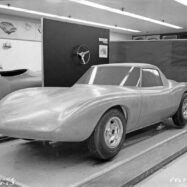 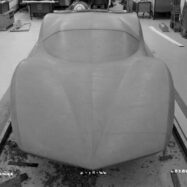 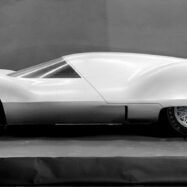 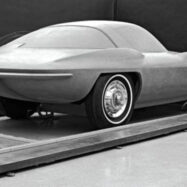 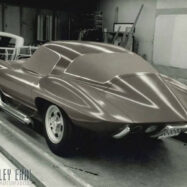 But ya gotta think there are more photos out there, right? If there are, you can’t find them in the Bowling Green museum and I’ve never been able to find them online.

I’ve always considered Bill’s greatest accomplishments to be the ’63 Buick Riviera and the ’63 Corvette split window… I tend to also throw in the 70’s era GMC Motorhomes… But, I think that it’s really more impressive that Bill was able to keep a secret operation secret for so damned long from so many people of power.

Bill Mitchell was a secret agent of change.