Reminiscent of Dick Craft’s ‘The Bug’, this bare bones dragster built by Gary Cagle and Clark Callahan in 1958 wouldn’t pass any shadow of NHRA safety standards by the 1960s. The fuel injected Hemi rail job was one of the pioneering examples mounted behind the driver, featuring additional weight savings and durability from mounting the gearbox directly to the rear axle. Top time was noted as 163 mph – Wide ride, huh? Note how much clearance driver Eugene ‘Red’ Case had between his buttocks and the ground! Sadly, Red died in a streamlined version of this car, running at Vaca Valley Raceway in May of 1959, at only 23 years old. His throttle stuck crossing the finish line at full speed, flipping end over end, which resulted in massive injuries. 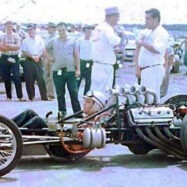 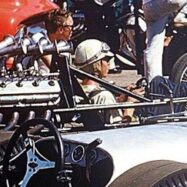 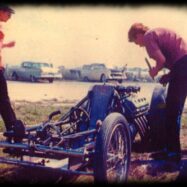