Posted by Ryan on January 3, 2022 and filed under: History

The week between Christmas and New Years is typically the one week a year that I choose not to work. I don’t answer emails, I don’t check for spam the minute I awake, I don’t police classified deals, I don’t do server maintenance, etc… I do, however, post features when something comes to mind because writing isn’t really work to me. It’s a release of sorts.

So last week, I found a funny little letter to the Honolulu Star from a pissed off old fart in Honolulu. Essentially, this “concerned citizen” was calling for random checks on hot rods running “stolen” Cadillac hubcaps. It was the quintessential origin story of a proper hot rodder from the other perspective and I loved it.

For reasons I’m not certain of, the comments went to politics within an hour and I was forced to close it up. Without some sort of social scientific process in place, I can only guess that the over saturation of politics and news has gotten so entrenched into some people’s lives that it is now unavoidable – even when bullshittin’ about old cars and the hoodlums that built them.

I wasn’t pissed. I was embarrassed. How did I not anticipate that little mess? If you put a coffee cup on the edge of the table, it’s gonna get knocked off – right? But the more I thought about it, the more I did get a little pissed off. No one has the right to tell me where to put my coffee cup in my own home. 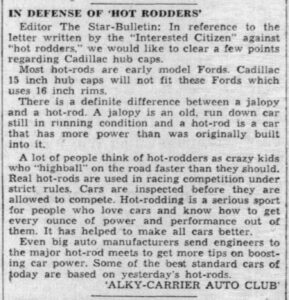 Keep your politics to yourself. No one cares – least of all, me.