Posted by Ryan on November 3, 2021 and filed under: History

“I think it was a Thursday night.  As I remember it, we were at Tommie’s house working on his project. Around 6:00, we turned to head for dinner when I noticed my club plaque was missing from the back of my model-a coupe. And just then, I mean right then, we heard the sound of straight pipes and screeching tires. So we all jumped in our cars and followed a little motorcycle that was hauling ass through town.”

“By the time we caught up with him, he was pulling into a park just north of downtown Saint Paul that was loaded with other guys and motorcycles. They all looked ready for battle – gripping pipe wrenches, chains, and the kinds of things you see thugs carrying in movies. I’d say there was around fifty of them and maybe twenty of us. Of course, we had no idea what we were getting into… and I think that was planned.”

“The bikers beat the hell out of us. I don’t think anyone went to the hospital that night, but most of us walked funny for a while afterwards and all of us went to jail. Our local police force didn’t care much about us or them. They stuck us all in the same holding cell and just turned a blind’s eye. But that’s when cooler heads prevailed and our club president was able to talk the biker’s down.”

“They thought we were a threat to them in someway, but once they figured out we were just a group of high school street racers, they were able to deduct that we weren’t worth the bail or the hassle. I don’t remember ever being bothered by them again, but the police is an entirely different matter. Being a hot rodder in the mid 50’s in our area was not easy.”

I got that story from an old pal of ours about three years ago. I never ran with it, because well… Sometimes stories get bigger over time and I like to be able to verify things before reporting. But last week while researching something else entirely, I can across this story printed in the Star Tribune in 1956: 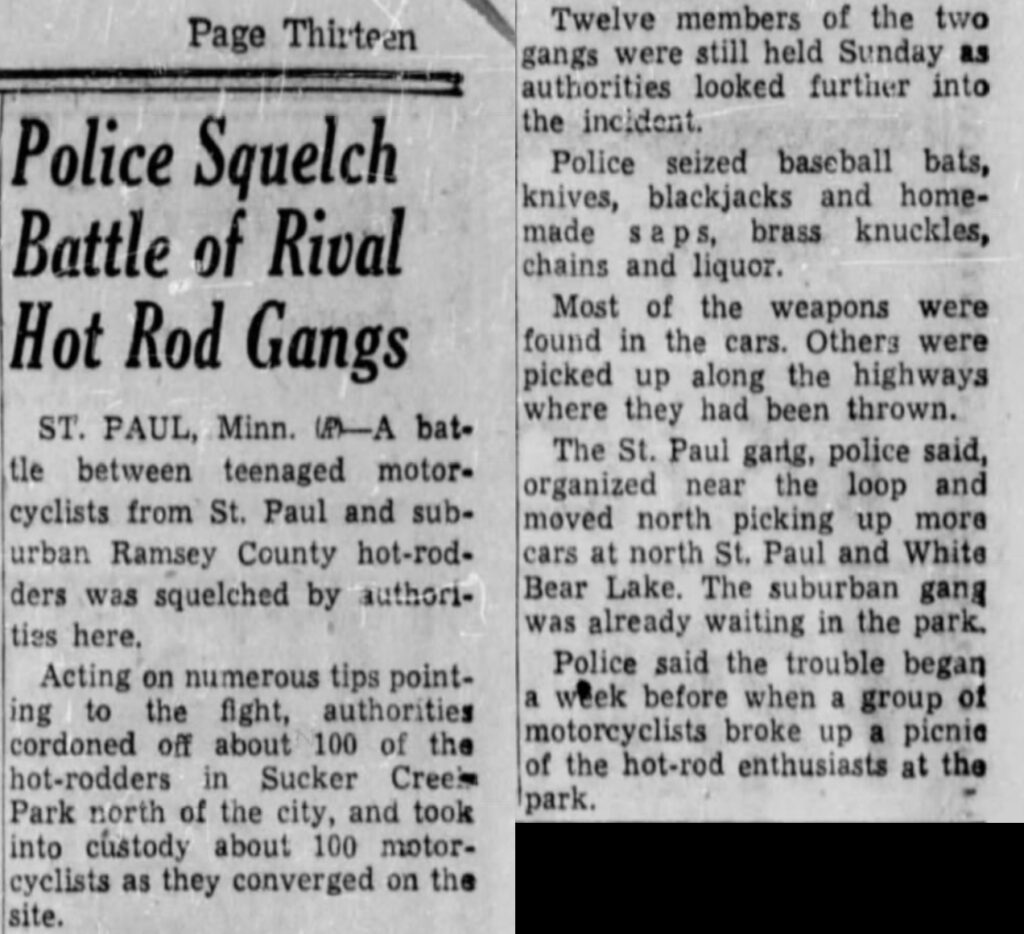 Seems as though my source was not on the sauce, but the up and up… It’s a real life “Hot Rod Gang” story. Something about these sorts of things always puts my mind to work. We like to think of the golden era of hot rodding as some sort of utopia on asphalt where the cars were fast, the women were innocent, and justice was true. Of course, life is never black, white and perfect. It’s complicated and intertwined with the flawed character of humans.

Editor’s Note: Humans are curious. I get that. But I felt weird about using some names in this story as I am unsure about who is still with us and who would mind having the story told all these years later. I do know that George would be okay with my publishing this as he gave me permission to do so in 2017. At the time, I asked him what club he was in and this was his response:

“I was in two clubs growing up. I started with the Regents, but right at about the time I was graduating high school a few of us thought of ourselves as real racers and moved over to a club called the Racesetters. If memory serves, this fight was right in the middle of all that. I think there were members from both clubs involved.”