The Death Of Harry Westergard

Posted by Ryan on September 1, 2021 and filed under: Customs, Folks, History

If someone was to put a gun to my head and demand that I name the “best” car customizer of all time, I would struggle but eventually blurt out the name of Harry Westergard. I say that not necessarily because of his metal shaping skills, but more so because of his talent for lines and form. This is subjective of course, but I feel as though Harry did so much more with so much less than anyone else, that even if you don’t like his style… Well, you have to give the man is due.

I just so happen to favor his style over anyone else’s. So, I guess the choice is obvious for me.

But that was neither here nor there last night. You might have noticed that I’ve been using a lot of old newspaper clippings in my features as of late. This spawns from a research project I’ve taken on for a buddy of mine that is writing a book. For the past year, I’ve been spending a couple of hours a week pouring over old newspapers searching for articles pertaining to the public perception of hot rodding.

And it was while doing that, that I found an article in the April 30, 1956 edition of The Sacramento Bee announcing the death of Harry Westergard. I’ve heard the complete story of the accident from Dick Bertolucci himself… and yet, this hit me strangely harder. It’s just somehow colder and more clinical.

To the Sacramento Bee, Harry was just some guy in a sports car with a fever for speed. To us, he was so much more… 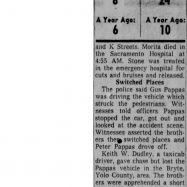 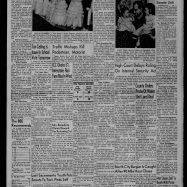