I’m not much for the negative – much in the same way that I’ve never been much for Barris cars. That’s a complex conundrum I just typed… I realize that. But with the closing of Barris’ shop, I thought it would be a fun exercise to throw some positivity towards one of the grandest legacies this little thing of ours will ever know.

Let’s start with this absolute fact that just happens to be a negative one – The ’41 Ford, in any form, is the ugliest pre-1965 Ford to ever roll out of Henry’s factory. You can argue against that, but I will make funny faces while you do so… and when you walk away, I will tell jokes about your mom.

Now, with that fact carved in stone… What’s the best ’41 ever built? It’s a question that comes with a challenging stipulation – your answer has to include some elements of the stock ’41 Ford grille. It’s not, after all, hard to make something pretty if you take away all the ugly.

My answer? The Barris built ’41 that belonged to Dick Carter. 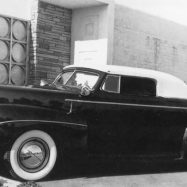 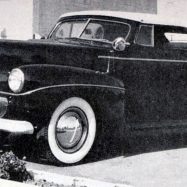 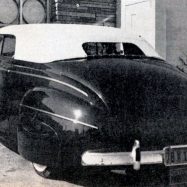 Some might say that this is a cheap cheat in that I’ve picked a car that was pre-hollywood Barris and styled mostly by Sam. To them I say, “You are right. Sorry.”