Time To Crack Down

The other night in Kailua an estimated 250-300 long-suffering residents stormed out of their homes with blood in their eyes when two teen-agers in a hot-rod came speeding and screeching down the road, their car apparently out of control.

One resident said for a few moments the teenagers were in definite danger from the crowd, which eventually was dispersed by police.

While we don’t condone physical violence, even against idiotic hot-rodder, there is nevertheless a healthy element in the crowd demonstration. It is unlikely that these particular kids will ever again take their fool machine into that particular neighborhood.

NIGHT AFTER NIGHT in various parts of Honolulu the quiet is rent by snarling motors and screeching tires grinding on the pavement. The hot-rodders have become a menace – not simply because they disturb the peace but also because they are a threat to other motorists and to pedestrians.

Police are hard-put to control them, primarily because of the inadequacy of existing law. One ordinance outlaws speed contests and another forbids speeding. But the problem of legal proof is sometimes difficult.

Races must be witnessed – and sometimes it is difficult to identify the contestants in court. As for speeding, in most cases offenders actually have to be clocked in order to establish the transgression.

Skid marks left on the pavement in the Kailua incident the other night can establish rates of speed, and these are being checked. But in most cases there are no skid marks.

Police maintain special patrols to catch hot-rodders but Chief Liu points out “when you conduct suppressive action against any one nuisance, the locale quickly changes.”

CHIEF LIU says a number of proposed changes in the law have been discussed. One such is mandatory revocation of license, which might be a physiological deterrent. Another would be to require individuals seeking licenses for re-built hot-rods to state why they want such vehicles.

Chief Liu says there are problems involved with all these. But until a more effective law can be found, he says, the department urges citizens to help.

Meantime, it is up to the department to pursue vigorously every reported instance of hot-rod insanity. While there admittedly are defects in the law, prompt and forceful police investigation can go a long way toward overcoming them. It is time to crack down. 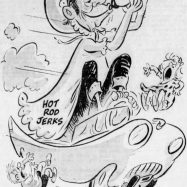 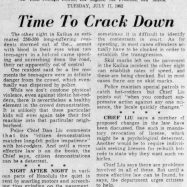