Trends come and trends go. As years pass, tastes change. During our hobby’s golden age, builders were constantly shaking things up as they worked to push the proverbial envelope. But what happens when your machine becomes obsolete? Maybe you sell. Maybe you stash it away. Or maybe the car just disappears, leaving only memories and faded scrapbook photos.

Today’s feature car is shrouded in mystery. There are two things we know for sure: 1) It’s very custom. 2) It served as a rolling billboard for Young’s Bait & Tackle shop in the town of Lucerne after its glory days had come to a close. Beyond that, the rest is just conjecture. If there’s a place to dig deeper, it’s right here on The Jalopy Journal.

I’ve had this image in my archives for years. It’s a shot from a simpler time, taken down by the river on a late summer’s day. You can almost hear the rustling trees and the swirling current. With the classic Philip Morris cigarette ad pinned up behind the car, I’m thinking it was strategically parked in front of the store.

So, the big question is, what the hell is it? Judging by the shape of the rear fenders, my first instinct was 1949 Chevy. That being said, it’s totally slab-sided, which would make me think shoebox Ford. The hood appears to be either Ford or Merc. The lack of wheelwells are very Nash-esque, but that doesn’t seem to add up either. The wrap-around windshield appears to be from an early-’50s speedboat. What’s with that metal square on the passenger side door?

Although it seems as if our subject is mashup of parts of different make and models, it is a finished car. It has a custom paintjob, tuck-and-roll upholstery and even a radio antenna behind the cockpit. With its long wheelbase, I wonder what it had under the hood? Possibly a Stovebolt six? Some sort of straight-eight? Or maybe a heavily setback flathead? Your guess is as good as mine.

What makes this tricky is that not only do we not know what type of car it is, we also don’t know where this photo was taken. It surely isn’t Lucerne, Switzerland. A quick online search showed that there are at least 21 cities, counties or villages in the United States with that same name.

Regardless of what it is or where it’s from, this mystery custom makes for some great advertising. On the most basic level, it kind of looks like a boat. Do you know anything about its origins? 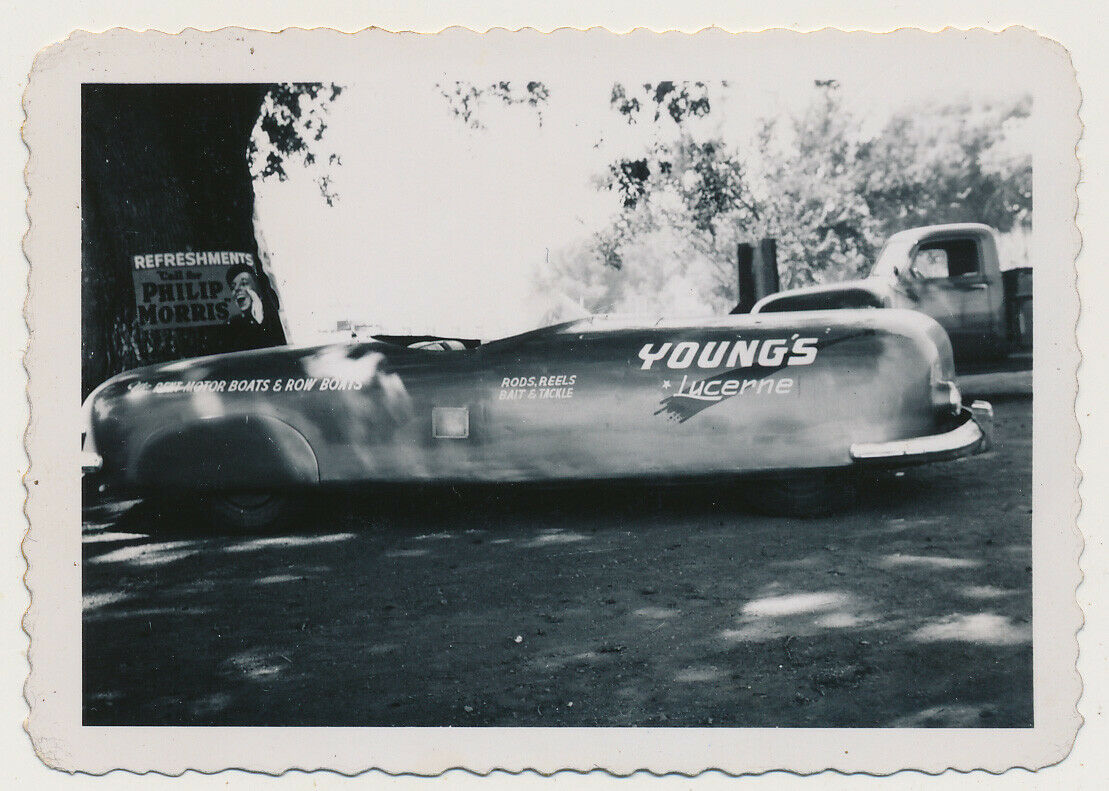