Chrome is expensive. White paint? Not so much. Whatever the reason, I’ve always loved early-’60s-style hot rods with white accents. Axles, differentials, shocks, firewalls and—best of all—inner fenderwells. If you live anywhere with precipitation, this may not be the best approach (unless you love cleaning, that is). But there’s no denying that these touches bring the car back to a flashier time in hot rod history.

As I was leafing through the February 1961 issue of Hot Rod Magazine, I stumbled upon Andy Fedora’s 1932 Ford. The Mandarin Red three-window is stock-bodied and extremely nice. Over a three-year period, he transformed the car into a show winner. Starting with a stocker, he took the coupe to Sparks and Bonney to have a ’56 Merc powerplant fitted between the rails. To blend the show with the go, he installed a 3×2 intake with a trio of Ford 94s. Other talking points included finned Edelbrock valve covers and a chromed set of tube headers. The whole setup is backed by a ’48 Ford trans.

To help get the car sitting right, Andy brought down the nose with dropped tube axle. The rest of the underpinnings were sourced from early Fords. The black steelies with Merc caps and wide whites scream Southern California 1961. Well, now that I mention it, so does the interior.

Rolls. Pleats. Diamonds. Gauges. Chrome. The coupe’s cabin is over the top but oh-so-right. Pair that with chromed running boards and white details throughout, this car was a knockout when it first hit the streets of Los Angeles.

From what I can tell, Andy’s coupe was a well-built machine. He invested $8,000 in the project, which comes out to about $70,000 in today’s dollars. With that money and that much attention to detail, I’d like to think that he held onto it for all these years. Maybe it still exists? We can only hope so. Nonetheless, let’s take a closer look. 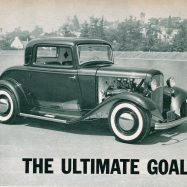 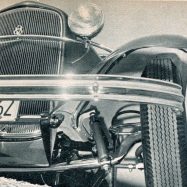 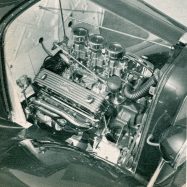 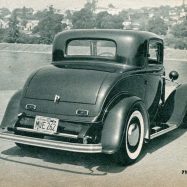 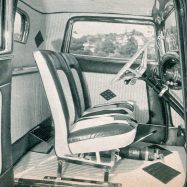 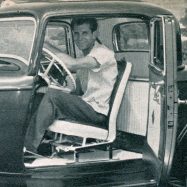