Posted by Ryan on February 17, 2021 and filed under: Art & Inspiration

I’m sure you fellas from the North are having your jollies, but the winter storm of 2021 continues to bring hell on Texas. We are currently on a power schedule of 30-minutes on and 30 off, we have no water, and as I type this, it’s 12-degrees outside.

To put it bluntly, this shit sucks.

In any regard, we hit rock bottom as a family yesterday afternoon. In an effort to raise spirits, I decided to load the family up in my modern and very capable 4×4 and head to brother Tardel’s house. They still had water and I figured a hot shower, clean clothes, and good company would help attitudes. It was a very welcome relief, but in order to get home before the roads became impassable again, we had to leave before dark.

Between the Cochran and Tardel households, there’s a steep incline on an old and neglected country road. On the way out, we pretty much just slid down the damn thing and I had no real idea if we could make it back up. On approach, I noticed a little beige pickup sitting at the base. As we got closer, I recognized it as an early Willys truck.

I’ve never been much of a Willys guy and have never paid much attention to them, but this thing struck me as it appeared to be a unibody and as it idled, it was very apparent that whatever was under the hood wasn’t stock. I stopped and cracked my window.

“You need some help?”

“No sir. I’m good… Just getting myself ready for the hill climb,” he replied with a smile.

“What driveline did you put in that thing?” I asked.

Before I could get details about the rest of the drivetrain, he hit the gas and went up the hill – all four wheels spinning the entire way up… but the truck staying straight as an arrow and failing at any attempts of drama. Meanwhile, I put mine in 4-low, engaged crawl control on the ice setting, and crawled up after him.

I think I might be a Willys guy now? I mean, if I lived in a climate that required 4×4 year around, I would be… There was something just so simple and purposeful about this little truck that sang to me. It all happened so fast that I didn’t have any time to take pictures. The shots within were found online, but this truck looks identical to what I saw.

Off topic, but super rad… 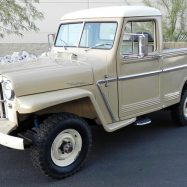 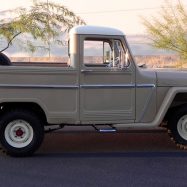 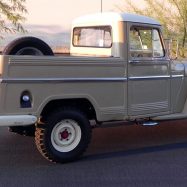 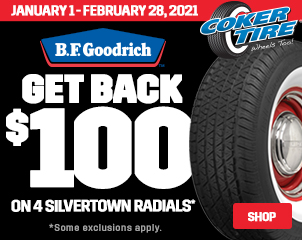