Posted by J.Ukrop on October 16, 2020 and filed under: Hot Rods, Motion Pictures

“What would you do for a Klondike Bar?” That was the old tagline that’s worked its way into the North American lexicon over the past 40-some years. For whatever reason, while browsing the classifieds, a variation of that phrase popped into my mind. My version doesn’t pertain to chocolate coated ice cream. Not by a long shot. Instead, today’s question is: “What would you do for a blown early Hemi?”

I’m not on the market for any overhead V8’s right now, let alone a fire-breathing 354 Chrysler. That being said, how could I resist a closer look? The potent powerplant seemed all the world like a full-size Revell kit with its 6-71 supercharger, two-port Hilborn, Vertex magneto, chrome valve covers and stubby zoomies. Sure, it had the form, but what about the function? The ad goes into detail.

“This vintage Hemi build is just what you would have seen at the drag races in the mid-’60s,” writes Bob Truesdel, the seller. “It puts out close to 800hp on pump gas and features: Milodon four-bolt mains, Howard’s aluminum rods, 7-quart oil pan, bronze-wall valve guides, aluminum rocker stands, needle-bearing rockers, Donovan exhaust rockers, 3/8” Smith Brothers adjustable push rods, 1/2” Isky blower-drive, 6-71 GMC Blower, Weiand intake manifold, Hilborn 2-port injector with scoop, O-ringed block, crank/rods=.010”, mains=.020”, Isky 550 Super Le Gerra camshaft, with a valve lash of .028” all across. The whole thing is fired up with a Vertex mag and the valvetrain is topped off with a set of original valve covers complete with breathers. This motor is ready to drop into your project and fire right up.”

Wait, what? Amongst the sea of late model imports, used mattresses and free piles of dirt, I knew I was staring at a piece of drag racing history. I had to find out more. I asked Bob if he had any additional information about the engine or photos of the car it was once in. He told me that it was originally built by Northern California drag racer Jim Davis and, if it doesn’t sell, it’s going back in the chassis—which a friend owns. Bob unfortunately doesn’t have any pictures, but I have a feeling that it was probably a pretty neat piece.

According to the ad, the engine is ready to go. So, with that in mind, I asked for a video. You can hear it cackle for yourself in the video below.

What would I do for a blown early Hemi? I’m not exactly sure. But if anyone has an extra $16k lying around, I would love to build a car around this Chrysler. Wouldn’t you? 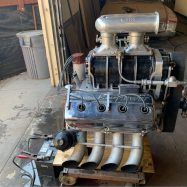 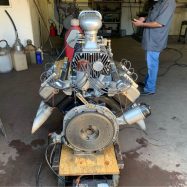 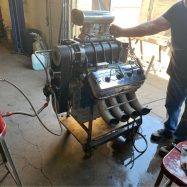