Posted by Jive-Bomber on September 24, 2020 and filed under: Customs

For those of you who know both your world history and classic car facts, will quickly note that 1942 is among the lowest production numbers for US automobiles. The new-for-’42 models were introduced around September of 1941, and after Pearl Harbor was attacked in December of that year, production halted within two months, as Detroit switched over from cars to military supplies. Ford was actually the last OEM to meet its limit, producing its final 1942 civilian vehicle (a Super DeLuxe Fordor), on February 10th, 1942. The production for the ’42 model year had totaled just over 160,000 units, which was their lowest number since 1912. This made 1942 models the scarcest year of Fords by a long shot.

However, back in the late 40s and early 50s, the ’42 Ford may have been unusual, but it was still just a fairly cheap used car. You might remember my story of the Sam Foose customized ’42 coupe a few years back? Well here’s a ’42 Convertible I found on Rik Hoving’s site that was customized in late 1947/ early 1948 by a gentleman named Fred in the Seattle area.

His letter describes the build as, “1942 car cut just back of the doors, ’41 back installed. Night shade blue metallic- Very dark blue. 1948 Plymouth bumpers and 1948 Plymouth taillights. 1942 Chrysler hubcaps. Light grey piped naugahyde seats and interior. Dark blue naugahyde headliner, Carson top, headliner piped from front to back about every 5 inches with chrome fender bead piping. Upholstery done by RV Young, a Journeyman trimmer who had been a parachute rigger in WWII. Bodywork and paint by Bill Staefen(?). Both were the best in the Northwest ever. Young’s Carson tops were the best I ever saw. PS- Notice the bottom panel of grille is chromed.” 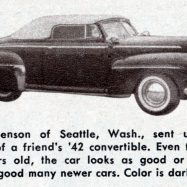 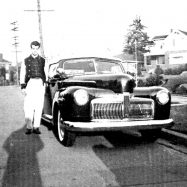 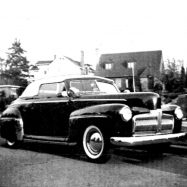 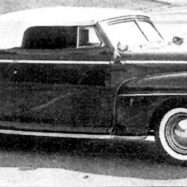 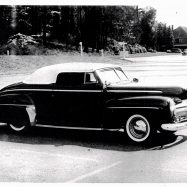