My stay in Michigan is coming to a close, and I’m winding things down with a short feature on an obscure hot rod of yesteryear. The car is an ever-popular Model T. And no, there’s nothing false about the title. The little roadster was built by a hot rodder by the name of Bing Crosby. As far as I can tell, there was no relation to the singer. This other Bing called Houston, Texas, home and one thing’s for sure—he had an eye for style.

The car itself is a standout. It sits nice and low thanks to a suicide front axle and Z’d frame out back. The body has been channeled the width of the frame, and a simple-but-effective nerf bar was put into service in the rear. That being said, the engine was undoubtedly the focal point.

You see, Bing went against the grain in the driveline department and installed a show-stopping 409 with a 6-71 supercharger and a trio of Strombergs. Everything was chromed or polished, from the valve covers and the blower casing to the headers and the carbs. What a remarkable combination of show and go!

The rest of the car is detailed in early model kit style, with its perfectly mismatched wheel and tire combination and high-riding roof. Even with the radiator shell running slightly uphill, Crosby’s candy blue roadster absolutely nailed the early-’60s look.

As you know, I usually end these with a “Where is it now?” type question. Well, as soon as I saw this car, I dug into my archives. I remembered seeing a chrome-laden T roadster with a sky-high top and three-carbed W-motor in Louisville at one point. After a little digging, I found the photo—and I immediately realized that it was not the same car. The search continues. Got any leads? 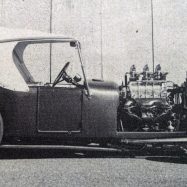 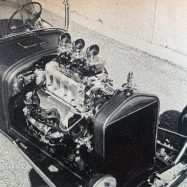 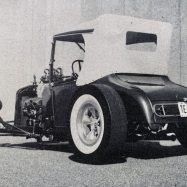 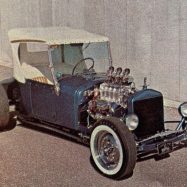 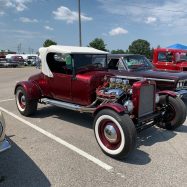