The 2-Much Twin-Engined Dragster?

Posted by Ryan on September 14, 2020 and filed under: History, Hot Rods

I heard a rumor the other day out of Midland, Texas… Apparently, the “body” of a historically significant twin-engined dragster was found in a small airport hangar last week. Locals aren’t talking details and with so much racing history from that area (Jim Hall, Eddie Hill, Carol Shelby, etc…), it’s really difficult to guess as to what exactly was found. BUT, I think I may have an idea…

Jack Moss used to run a twin Chevy powered streamliner from the late 1950’s and well into the 1960’s. Named “2-Much,” Jack’s double digger was a beautifully designed race car based out of Amarillo – just a stone’s throw away from Midland. I first heard of the car when reviewing old images of the “Texas vs California” match races that were held in Amarillo in 1960. The caption of the shot showing Jack taking first-in-class mentioned that the car used to run a streamlined body. Curious, I did some searching.

These images turned up: 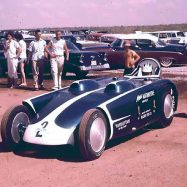 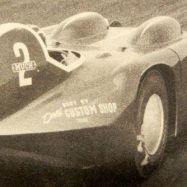 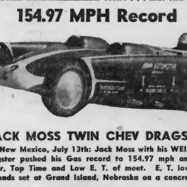 The body was formed by Don’s Custom Shop in Tulsa, OK… But, the car never performed consistently with it mounted. After less than a year, Jack gave up on it and stripped the car of its sheetmetal work. He then went on to have a lot of success with this and other twin-engined dragsters.

The question of the day is, what became of that body? Did it end up in a hangar in Midland, TX? I’m not sure, but I’ll do my damndest to find out.