Hop Up Test No. 4 – The Bob Longman Roadster

Posted by Jive-Bomber on September 10, 2020 and filed under: History, Hot Rods

If you’ve got a copy of the July 1952 issue of Hop Up (or the reprint of the Hop Up- The First 12 Issues), you’ll find Bob Longman’s ’32 Ford roadster as test car of the month. It’s noteworthy for a few styling reasons- First that channeled street-driven hot rods in SoCal were pretty unusual at the time, as well as the lack of front frame horns and full bellypan treatment usually reserved for purpose-built racers. Reading further you see the color listed as a ‘Deep Purple’ along with ample chrome plated parts. The last design detail that really caught my eye was the nerf bar-type rear bumper with floating taillights- I’ve never seen this rear end treatment on another street roadster in this time period, and I think it looks pretty darn cool. Overall the build quality is obviously top-notch, and a Hop Up feature car to boot, which begs the question, “Where is the Bob Longman Roadster now?”.

According to a HAMB post many years ago, Wil Sakowski noted: ‘Just got off the phone with Richard Peters (not of Ala Kart) who bought the car from Longman on a ship during the Korean War. The last he knew of the car was around ’54 when he traded it for a chopped ’50 Ford custom, who’s brother was a taxi driver in Gardena.’ 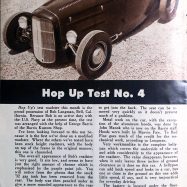 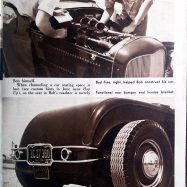 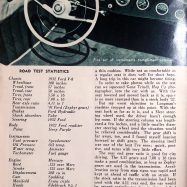 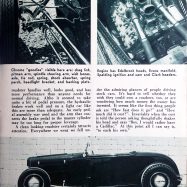