When it comes to storytelling, people always say you do your best work while writing about something that you’re passionate about. In our world, that’s cars. Old ones. Machines that are built with non-existent budgets by those who obsess over the smallest of details. Vintage tin. Antiquated componentry. This is the life we chose. Ain’t it grand?

Every industry has jargon. How many times have you talked about a Deuce, flathead or Gasser and had people look at you like you’ve lost your mind? I’ve lost track. We have our language. It’s part of our community, and it can get confusing for some folks faster than you can say Halibrand quickchange.

Longtime readers will know that I love finding hot rod material in unexpected places. Whether it’s on a can of Liquid Wrench #2 or in the pages of Sports Illustrated, seeing a hot rod out of its natural environment brings a smile to my face. Sometimes these articles are written by those who know more about writing than cars, or sometimes it’s the opposite. Both can lead to some awkward wording, but it’s fun to get a different perspective on this hobby that we care so deeply about.

In the mid-’60s, the New York-based magazine Hi-Performance CARS covered a little bit of everything. Drag racing, muscle cars, boats, tech and an eclectic mix of hot rods. Much like Popular Hot Rodding, CARS focused on lesser-seen machines from across the country. Classy layouts, color photography—what’s not to like?

For their May 1966 issue, they featured Ray Zarick’s Model T roadster pickup. At first glimpse, I figured it could have been an Early Times club car, considering Roger Brinkley’s similarly painted Deuce sedan appears elsewhere in the issue. Nope, not the case. Ray, only 20 years old at the time, called Sacramento home. As far as I can tell, he still does.

The little T was state-of-the-art for the mid-’60s with its Skylark wires, 370hp smallblock and resplendent Metalflake paint. Or, as CARS put it: “Power comes from a stroked 283 Chevy which now sports 352 cubes. Four two-barrels meter the gas. Steering gear grabbed from a ’56 Ford is directed by a sharp Covico tiller.” They got a kick out of referring to the wheel as a tiller, which they did more than once.

This article is a little different, but it has an unmistakable ’60s feel. It’s short, sweet and to the point. So let’s kick off the weekend with a totally terrific T for all to see. 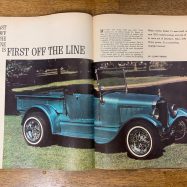 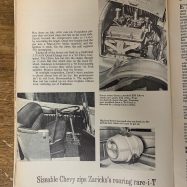