“I don’t know man… Pretty sure I’ve covered every custom Corvette built between 1954 and 1965… Every example worth mentioning anyhow.”

“Nope. You have never featured Bob’s. I know, because the car is still around and I searched The Jalopy Journal for history not long ago. You’ve covered him, but you haven’t covered his car.”

I honestly thought Jeff was full of shit. I oddly pride myself on my early Corvette Custom knowledge, so how could I have missed McNulty’s car? I mean, Bob McNulty was sort of the guy in the 1950’s and 60’s when it came to the glass cars. He had a hand in just about every notable Corvette of the time – including the Robert Clew’s Corvette and a number of Kellisons (another side passion of mine).

But somehow… someway… I have ignored his “shark” all these years. Well, that shit comes to an end today.

It all started when Bob found a wrecked 1955 Corvette. He then extended the quarters on each end, accentuated all the shapes he could eye, and did his thing using nothing but fiberglass. Somewhat curiously, however, he used aluminum for the hood and deck lid.

The car took a top prize at the National Roadster Show in 1958 and afterwards, Bob started to make changes. He added a Kaiser grille and made some minor paint changes before deciding to go nuts by cutting the trunk into a truck bed and renaming the car “The Sharkamino.”

Fast forward to 1968, Bob was involved in some sort of a boating accident and passed away. The car was then donated to the Peterson Museum and, as far as I know, was kept by them until relatively recently. You might remember Joey running into the thing in 2019.

Makes you smile, doesn’t it? The Skark still lives… 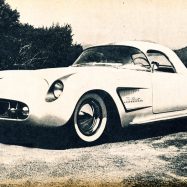 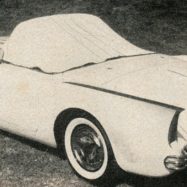 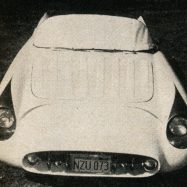 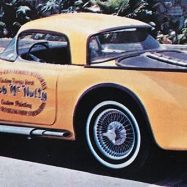 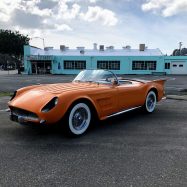 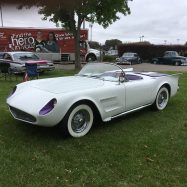