Posted by J.Ukrop on February 14, 2020 and filed under: Event Coverage, Hot Rods

A couple of years ago, I found myself wandering around a car show in Northern California. It was a Sunday in late August and, for the most part, the majority of the participants had packed up and gone home. As cars tricked out of the fairgrounds, I figured there was no better time to stretch the legs, take a stroll and unwind after a long weekend in the booth.

Rather than making my usual trip to the water fountain or mosey-to-the-bathroom lap, I opted for something a little different. My new route brought me through some convention halls and into a shaded courtyard. A sign indicated that I had stumbled upon the Bay Area Engine Modelers.

I looked around. At first glimpse, the powerplants seemed familiar, almost as if they had been plucked from vehicles from the show and scaled down. I saw a man with a gray mustache, blue button-up shirt and a ballcap emblazoned with the letters “CIA.” (Was there a government connection? Your guess was as good as mine). He introduced himself as Paul, a member of the club.

“What’s the story on that one?” I asked, pointing to a small-scale supercharged V8. With its exhaust port spacing and head design, I initially thought it was a smallblock (pun intended) Chevy. After consulting a few sources, I believe it was actually modeled after a Ford Y-block.

Paul informed me that the little engine measured a whopping 7.8 cubic inches and boasted a compression ratio of 10:1. It ran on 100 octane and yes, it’s fully functional. With an electric drill in hand, he fired it up. I watched with a big smile as he rapped the throttle, causing the engine to shimmy across the aluminum picnic table on which it sat.

It doesn’t get much better than that.

I later learned that the Bay Area Engine Modelers have been meeting regularly since the early 1990s, and they have an informative newsletter aptly named CrankCall. I plan to take a closer look at the club down the line, but for now let’s enjoy the roar of this tiny V8.

P.S. For those of you who dig engines of the V-twin variety, here’s Paul firing up “The Hoglet!” 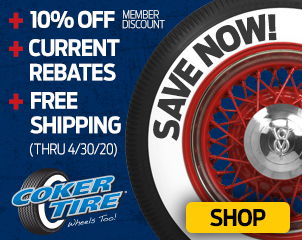