What is it that draws you to a car at a show? Is it the colors? The chrome? Or maybe it’s the make and model? Is it because you like it? Dislike it? Haven’t decided yet? What elements make you want to dig deeper? These were all thoughts I had over the past week as my mind skipped back to the Grand National Roadster Show. Were there cars there that piqued my interest? You betchya. Some did, and a lot did not. It takes a great deal to stand out these days and, in the case of the Roadster Show, I always remember the old adage that money can’t buy taste. So it goes.

I didn’t let that get me down, not for a second. Instead, I thought about how many people out there build—and continue to build—amazing pre-’65 machines. They get the big picture and the little picture—just like Clint Carman did more than 50 years ago.

Clint, a hot rodder from St. Louis, Missouri, started tinkering with cars when he was 16. After hopping up his ’56 Ford, he dove head-first into a Model T project. His goal? Build a car that was suited for both street and show.

The project began with a Model A frame, which he reworked in every way possible. It was shortened, boxed, narrowed and Z’d for good measure. Up front, he sourced a ’34 Ford axle and mounted it suicide-style. Out back, he used a late-model Chevy rear suspended by a Model A spring. Custom chromed ladder bars kept everything in position. Chrome-reverse wheels, wide whites and piecrust slicks added to the appeal.

As nice as the chassis was, the powerplant was the real focal point. Looking more-than-capable for street and strip action, the ’58 Chrysler Hemi was bored and stroked to 464 cubic inches. The cam was a Racer Brown product, and the sextuplet of Strombergs sat atop an Edelbrock manifold. A Vertex mag provided the spark, and just about everything was chromed or polished.

Truth be told, the headers are what caught my attention. They’re sweeping, symmetrical and bell-tipped. They’re creative, functional and definitely chrome. Interestingly enough, they’re routed underneath the car to help keep the volume down. What? Seems like a sound idea to me.

For the interior, Clint filled the dash with Stewart-Warner instruments. The seat was upholstered in button-tufted Naugahyde, and a Moon-style gas pedal added a touch of competition flair. On this car, you can’t overlook the details, like the translucent die shift knob, 1914 cowl lamps our Tommy Ivo-inspired “outhouse” rear window. All the elements work in concert, making Mr. Carman’s car a showstopper in 1965 and today. I wonder if it’s still around? If it was, I know it would catch my attention at a show. But the real question is…what color is it? 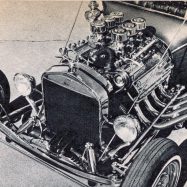 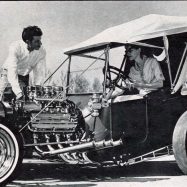 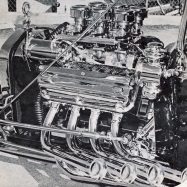 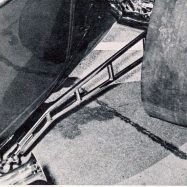 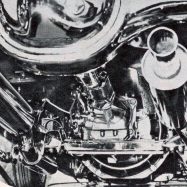 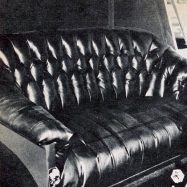 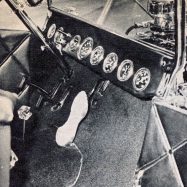 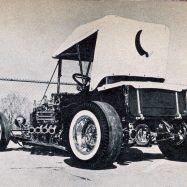