The best thing about my job is the emails I get. I don’t post all of them, but every now and then it strikes me to do so. This morning I’ve been struck…

Hey Ryan, Don Pruett here. I won first in class with my 1956 Studebaker Hawk in mid-summer of 1964. I was then invited to the Winter Nationals in California, but it was my daily driver and I just couldn’t risk losing my way to work. I have pictures but don’t know how to send them.

Don, Why don’t you try emailing a few?

I’ll try these photos. I’m now 75 but remember it like it was last week.  Little Hawk ran faster than a pair of cheap red socks in hot water…  259 cu. in. V8, new valve job on top of a new short block, and topped with a Carter AFB 4-Barrel carb.  These Studebakers had adjustable solid lifters.  Tranny was a Borg Warner three speed auto.  Fords & Chevys in my class all had two speed autos – Ford-a-matic and Power-Glide.  I bought it on the back of a used car lot for $500.00 in the summer of 1963.  The paint is as I bought it.  No dents or body cancer.  Wish I had it today.  (Notice the Avanti hubcaps from a friend who put chrome spoke wheel on his Avanti.)

Thanks for the trip down memory lane, 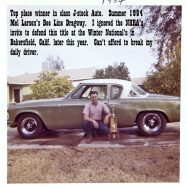 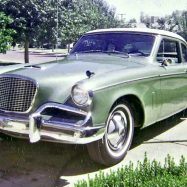 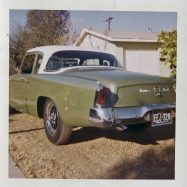