Yesterday I came to the grim realization that some new cars just don’t have jacks. In many cases, these same cars also don’t have tire irons, lug wrenches or spare tires either. I learned these hard facts of life as I sat in our immobilized work van near an overpass on California’s 101 Freeway, hopelessly thumbing through the owner’s manual as the temperature continued to rise.

Whoever wrote it had a sense of humor, because every piece of equipment listed was followed by the words “(if equipped).” Jack? Optional. Spare tire? Optional. Lug wrench? You guessed it. I glanced back at our right rear tire, which looked more like a tired birthday balloon than a road-going radial. Without any tools, we were stranded. Two hundred thirty-eight miles separated us from our final destination—the L.A. Roadster Show.

As I paced through the nearby golden grass, I was hit with a familiar feeling—New cars can make you feel helpless. Yes, they run and drive and stop and get you where you need to be when the going is good, but they can be unruly brutes when things veer off course. It’s frustrating—especially when you strive to be a do-it-yourselfer to the core. So what’s all this have to do with today’s post?

Let’s turn back the clock to 1964. Hot rodding is booming, early iron is still somewhat affordable and the aftermarket industry is taking flight. But for those looking for year-round reliability and contemporary styling, a late model may have been the best bet.

In Car Craft’s July 1964 issue, artist William A. Moore took to the drawing board and put a brand new ’64 Buick Special under the knife. Staring with a pedestrian—yet attractive—sedan, he introduced a wide range of styling options that spanned from mild to wild. Some enhance the lines while others detract. When viewed in profile and three-quarters rear, I’d say he hit the nail on the head. Check it out. 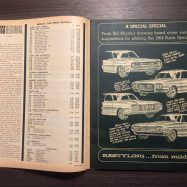 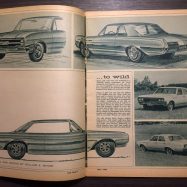 Oh, and as I’m sure you can surmise, we ended up making it to Pomona for the Roadster Show (thanks to a little help from a nice local family and the fine folks at King City’s Tire King). Let’s stick to old cars from here on out. Sound good?