Over a decade ago, I bought a set of finned aluminum valve covers for early SBCs on the HAMB that had the letters “RPM” casted mysteriously into the top. I knew nothing about them and don’t believe the seller did either, but thought they were cool and stashed them in the “to be used” box for a later date.

And then, a good pal of mine moved to Austin while his wife closed out things at home. After a few weeks, he was missing her in a bad way and a few of us got together to raise some dough in an effort to fly her to Austin as a surprise. I auctioned off the valve covers on the H.A.M.B. to support the effort.

Doc. won the auction… and then, a year or so later, he sent the valve covers back to me as a birthday present. So now, I’m stuck with them for good – for sentimental reasons if not for anything else.

Anyway, after the re-gift I got serious about finding out just where in the hell these things came from. A good pal of my dad’s that has an intense history at Indy and works for one of the winningest Indy engine builders of all time saw a post I wrote about them on the H.A.M.B. and shot me an email.

“You were right about those valve covers. Mickey Thompson had them made in 1962 or ’63. At the time, he was building a small block Chevrolet powered Indy car. He had a number of test engines for the car and labeled them with the valve covers. So one set of valve covers might have had “HP” casted into the valve covers. Another, “Torque” and so on… I bet those were meant for some high winding motor he was testing.”

Ironically, and as most of you probably know, Mickey’s Indy car never qualified due to engine problems.

To be honest, I don’t know if I believe that these valve covers came from Mickey or not… I don’t know that I care. I just love them… and the story behind them. And, someday I’m gonna use them on something. Promise. 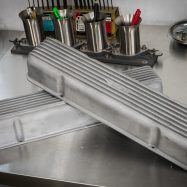 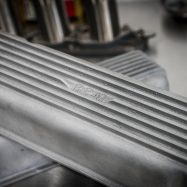