The Birth Of Outlaw Hot Rodding

JB Cochran was my grandfather. He ran and operated Cochran Garage in Ada, OK from the late 1930’s until he eassed away at an early age in the 1950’s. He was a working man that ran a local garage and made his living by way of honest service to his small Oklahoma community. I’ve told this story before and many of you have seen this photo that I proudly display whenever the opportunity arrises: 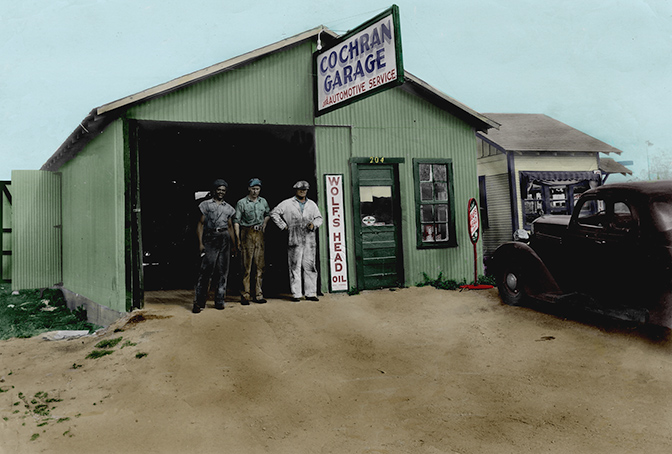 There’s another part of this story, however, that I’ve never told and it’s one that I’m not nearly as proud of… See, the 1930’s were known as a period that has since been labeled the era of the “Auto Gang.” Auto Gangs were groups of bandits who took advantage of having the same weapons and faster cars than police to run from state to state before federal laws existed to stop them. Essentially, these gangsters hot rodded early Hudsons, Fords, and Buicks in an effort to be first to the border. Winning meant freedom and riches. Losing meant death or capture.

Just about every area of the country had underground shops that provided hot rods to gangsters. On the west coast, the main support shop was Cochran Garage located in Reno, Nevada and ran by a man that ancestory.com labels as my great uncle – Frank Cochran. Locally, Frank was known as an accomplished pilot that had retired to the ground in order to run a small auto and aero shop. By day, he would maintain the Reno Police Department’s fleet of vehicles. By night, he was hot rodding Hudson Greater Eights (his vehicle of choice) and supplying them to both John Dillinger and “Baby Face” Nelson with the guarantee that his cars were the fastest on the coast – government owned or otherwise. 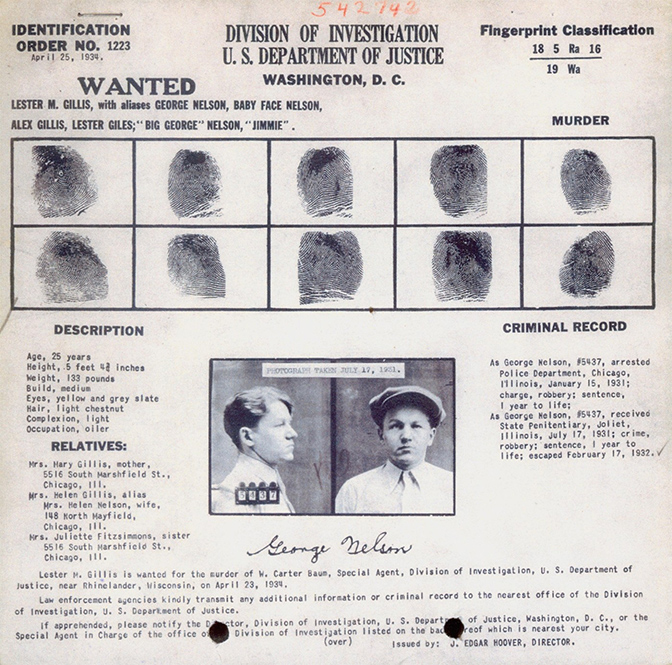 “Baby Face” Nelson would have a bank robbery planned in San Francisco. Before carrying out the job, he’d order a Hudson from Frank with options such as a police siren (liberated from a Reno PD unit), bullet proofing, or a deck lid cut-out just big enough to aim a rifle out of. Nelson would then carry out the robbery and flee in his hot rodded Hudson for the Nevada border. Once across, he would then head to Cochran Garage where he would ditch the Hudson and pick up a “clean” vehicle that my great uncle provided from his yard. In a sense, this made robbery for guys like Nelson and Dillinger a simple race. If they were fast enough, they couldn’t be caught.

And Frank Cochran was very good at what he did. Although it has never been proven or at least published anywhere, I’ve been told that every robbery committed by Nelson was done so with the aide of a Hudson modified by Frank. Many of these cars were also passed along inside the gang to Dillinger and other gangsters where they were used further as getaway cars. And because of that built reputation, Cochran Garage (also known as the Air Service Garage) became the goto spot for gangsters looking to get their car “serviced.”

In fact, it was this very reputation that eventually caught the eye of the FBI. John Paul Chase, another notorious bank robber in the auto gang, was on the run in his Chrysler Air-Flow after finishing a job. The feds followed his trail to Reno where Chase dropped his car off with Frank to be serviced. On a hunch, an FBI agent checked Cochran’s garage and, of course, found the Air-Flow. This event certainly piqued the interest of the FBI, but it wasn’t until they found a Reno PD siren in yet another gangster’s car that they knew Frank was on the nefarious tip. 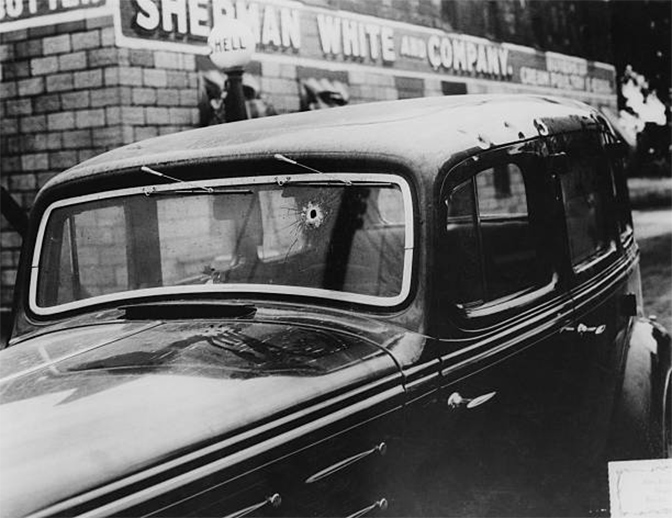 A Hudson sedan used by Dillinger in a robbery and possibly hot rodded by Frank Cochran.

“They grabbed me 160 miles south of Reno and immediately started questioning me,” Frank said in an interview. “If I came clean, they promised not to put my wife in jail… and then, one of the agents said they had the right to shoot me and probably should. I knew then that I had to keep my mouth shut.”

Frank never snitched. In fact, during the weeks that he was being questioned by the FBI, he was tipping off Nelson as to what the agency was up to and where they were looking. Eventually, he was convicted of “conspiracy to harbor” and spent one year and one day in federal prison. A number of years later, a group of prominent Reno politicians got together and wrote a letter to Harry Truman asking for a presidential pardon. Despite heavy protest from J. Edgar Hoover, Truman obliged and the matter was wiped from Frank Cochran’s record. He died (I think) in 1969. 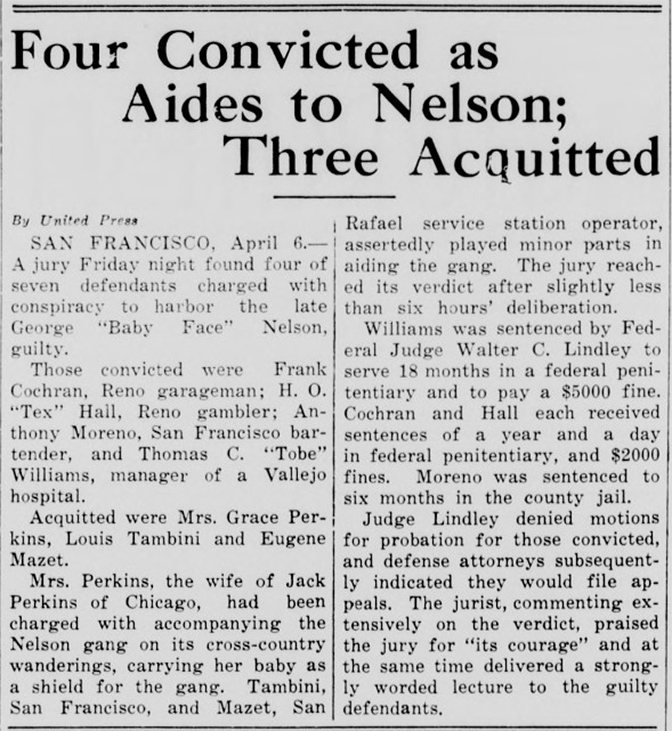 Obviously, I could write for pages and pages on my great uncle Frank. And maybe that is something I’ll do someday as I have done more research than I care to think about… But if you are really interested in the subject, Frank Cochran’s dominance as an outlaw hot rodder, or “Baby Face” Nelson’s antics, I can lead you to a couple of places. The first is a sort of “Cliff Note’s” story covering Public Enemies found here. And then, there are a couple of books that more fully cover the details of the Dillinger Gang, their use of hot rods, and of course, Frank Cochran:

Baby Face Nelson: The Portrait of a Public Enemy

I’m sure most of you still reading are looking at your computer/phone in much the same way that I looked at my old man when he first told me this story. It wasn’t all that long ago that I first heard of Frank. A few months before my dad passed, he laid in a hospital bed recovering from a medically induced coma while telling me an elaborate and well… exaggerated version of this story. Like his nurse, I figured it was something his mind had worked up while under the influence of reality altering drugs.

I let the story sit in the back of my mind, but never forgot it. My dad was always a great story teller, but he was never one to make shit up. A few months after he passed, a family friend sent a link to a story about Frank Cochran, Nelson, and Dillinger that collaborated much of what he said. I dug deeper and deeper until I found clarity… as well as a few more surprises.

I think the predominate leader in history telling as far as hot rodding goes is a guy by the name of David Lucsko. In 2008, he wrote The Business of Speed while a graduate student at MIT. In it, he writes about the birth of hot rodding between 1915 and 1927. Essentially, the introduction of the Ford Model T made automobiles affordable and therefore, universal. As these cars became more available to lower income brackets, the working man (engineers and other mechanical types) became more enabled to use their innovation to produce speed. Suddenly, a cheap little car from Ford had the potential to outrun a more exotic $3,000 car.

Within just a couple of years companies like Rajo and Riley were marketing overhead valve kits and presto – commercial hot rodding was born.

Around the same time, WWI was coming to an end and soldiers were re-integrating back into life in America. Some of these fellas came home with a new appreciation for the mechanical and an in-depth knowledge of motors much more exotic than the little bangers found in the Model T. The path was paved for them to hot rodding, but the great depression left them unable to drive down it with a powerful car like the Essex or Hudson. 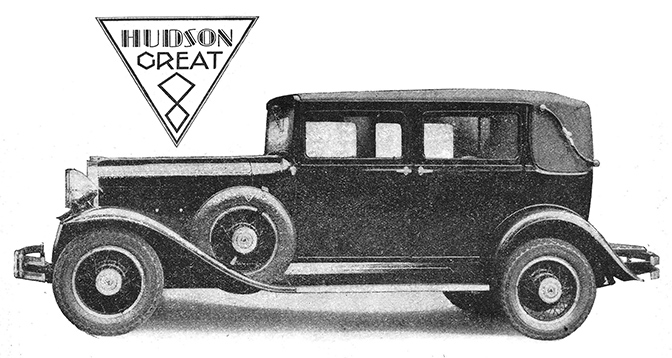 However if you back a guy like Frank Cochran into a corner, he is gonna find a way. And Frank’s way, misguided as it was, was to supply the underworld with the fastest cars of the time – no matter the cost or repercussion. There were other guys doing similar acts of misdeed… Clarence Lieder, for example, ran Oakley Auto Construction in Chicago. Clarence was a close friend of “Baby Face” Nelson and often supplied cars to Dillinger and other members of the gang, but Nelson was impulsive and preferred the speed and reliability of the Hudsons provided by Frank.

“Jimmie (Nelson) was fanatical about the state of his cars,” Frank once said. “Each vehicle had to be fine tuned and maintained in peak condition for acceleration, speed, and durability. He was tough on them, but never let them run down.”

In fact, most of my research and reading suggests that Frank’s guarantee of providing the fastest cars in the country was trusted by just about all of the top echelon bandits of the time. And while do-gooders in the midwest had trophies to show for their achievements in hot rodding, Frank Cochran had something else – the fact that none of his cars were ever caught. He died undefeated.

Even the mighty Hudson Motor Car Company, in their early efforts to tame speed, might have siphoned knowledge from Frank. The 1937 Hudson Speedster, a car that Hudson built to run at Bonneville in an effort to prove endurance and performance, was featured in a McCulloch Supercharger advertisement. And although there is no real evidence to prove it, I believe Frank Cochran might have been the first to use a McCulloch on a Hudson. 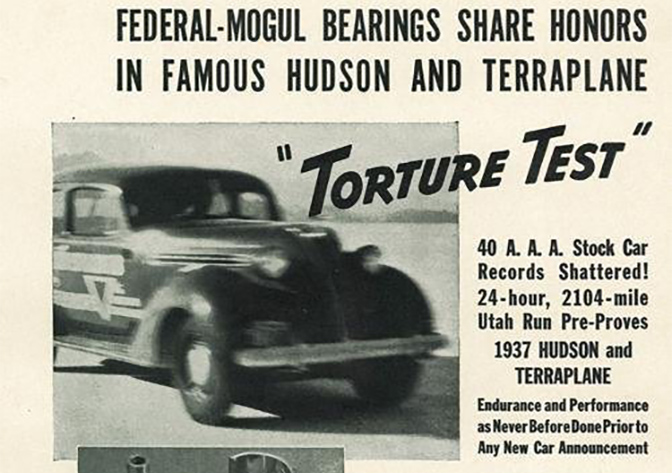 The first Hudson “Torture Test” car was actually a 1937 sedan. There are no known photographs or much mention of the speedster that Hudson supposedly built as well. However, there are a few sources that claim that Hudson’s speedster was used as a blueprint for the Gilmore roadsters.

Whatever the case may be, this dive of mine into the life and times of Frank Cochran has been quite disorienting. On one hand, it has been nothing short of prodigious to discover that I have a family member that can be directly traced back to the roots of hot rodding. When I think about it subjectively, it all lines up. Cochrans as a whole have two predominant traits – a passion for speed and a fanatical drive for success. There is no doubt that Frank Cochran had both.

On the other hand, however, there is no way around the fact that Frank Cochran used that drive to aid and abet murderous thugs. Society tends to glamorize old gangsters like “Baby Face” Nelson and I’ve certainly been guilty of that as well. But when you find out your own blood is involved, it tends to change your perspective. 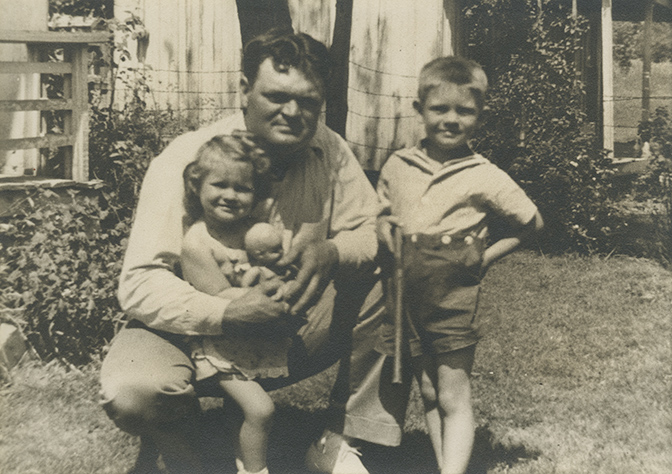 JB Cochran along with my dad and his twin sister.

I’m unquestionably proud to call JB Cochran my grandfather. He was an honest man that worked hard through his tools and his shop to earn the trust of his small Oklahoma community. And my own father? He was the best man I will ever know and to be perfectly honest, he achieved much more in his chosen field than Frank Cochran ever came close to in his – forefather of hot rodding or not. 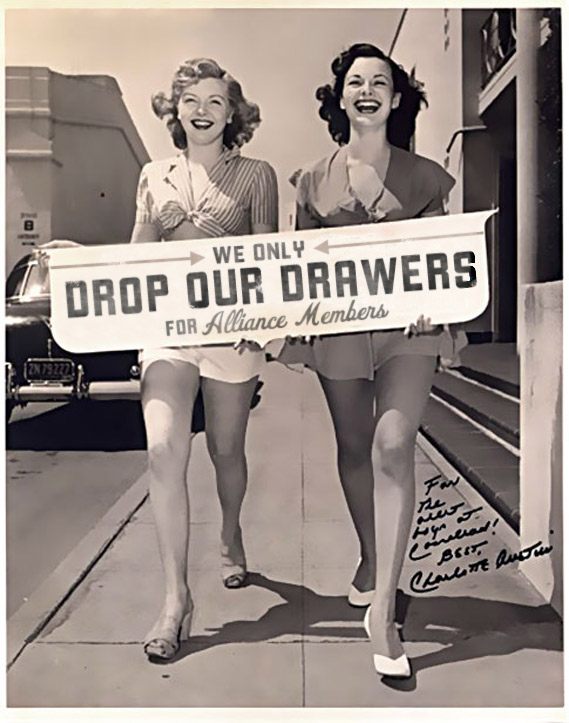