Posted by Jive-Bomber on September 19, 2017 and filed under: History, Hot Rods

The header image already gave it away, but here’s the question anyway: What was the first stock body production car to pass 200 mph at Bonneville? And what year was it? It was the SanChez, Kamboor & Ansen Special (formerly the SanChez & Cagle car), a 1953 Studebaker Coupe running a full-race 454 c.i.Chrysler Hemi at the 1958 Speed Trials. The class was D/ Coupe, and running  pure alky, the history-making speed was a blistering one way pass of 210 miles per hour. On the return run, the motor gave way at 200 mph, but bar was set and would go unchallenged for a while. SanChez Stude had already been coming to Bonneville for three years at that point, first running Arden Flatheads before the switch to the mighty Hemi in ’58. The car was indeed completely stock bodied (including all chrome trim), except for the headlights being filled in. Rules also allowed a 25% engine set back and any aerodynamic modifications that didn’t alter the body. Belmont SanChez’ big aero trick were vents below the back window that allowed trapped air to exit under the car… That was reportedly good for an additional 12 mph! 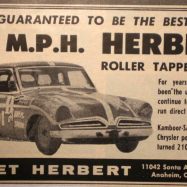 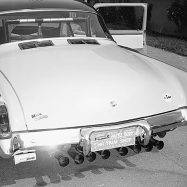 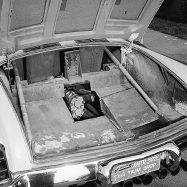 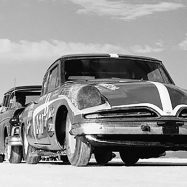