Posted by Ryan on May 22, 2017 and filed under: Customs, Feature Articles, Hot Rods

This feature was originally ran in 2007. I’m running it again because the old version had some formatting issues… and well, I love this one and wanted to see it again. Enjoy.

This is a story that I have wanted to write for a long time. It’s a story about family, tradition, form, and horsepower and the different ways each can be found in cars that, at first and second glance, are very different from one another. Before I get started however, I think an introduction of the cast is in order.

The Ferrari
It’s a 2003 575 Maranello to be exact… Ferrari’s signature has long been fast, elegant, long-hooded, and v12 powered touring cars. It started in 1948 with the Ferrari 166 and continued through the decades with a number of super fast road hugging monsters. The 575M is Ferrari’s latest offering in that same vein. It’s a traditional thought with a very modern implementation.

A Pininfarina sculpted body hides technology that produces earth shattering performance. The hand assembled 5748cc V12 produces a tad over 500 ponies and mates to a paddle shifted and F1 inspired 6-speed gearbox. It’s all good for 12.4 second quarter mile blasts at over 117mph. The sound is just gravy…

The Black Dahlia
This ’36 Ford coupe turned roadster was built out west but has become synonymous with Austin, Tx and its owner – Steve Wertheimer. If you’ve ever been to the Lone Star Round Up or maybe even driven by the Continental Club on any given night, you know this car and you know it well.

At its very core, the Black Dahlia is an early style custom with roots planted firmly in the Westergard era. The Olds (’51 303) powered roadster sports a reverse rake, LeSalle grille, and heavily tunneled headlights. Not many cars look as sinister as this custom does while bombing the boulevard thanks to work done by some of biggest names in the game – Jim Bruns Sr., Gary Howard, Von Franco, etc… It’s pure style over anything else.

The Tardel/Cochran Coupe
By now, most of you know this car. Built by Keith Tardel and co-owned by yours truly, the Tardel/Cochran coupe is a super traditional 1930 Ford on deuce rails. It’s powered by a ’47 Ford blocked flathead with a 4 ¼” stroked crank, secretly ground cam, dual intake, and a pair of Stromberg-97s. The rest of the drivetrain consists of a ’39 Ford gear box spitting out a torque tube to a Culver City Quickchange.

For all intents and purposes, this car could have been built almost identically in 1950, but it is traditional in two senses of the word. While Keith is among the world’s finest traditional craftsman, he was brought up and taught by another – his father Vern. It’s a legacy worth considering later in this article.

The Reasoning
I’m sure most of you immediately questioned the relevancy of this cast of characters as soon as you saw it.

“What the hell is Ryan doing shooting a modern day Ferrari?”

The first step to understanding the significance of the Ferrari is to drop all of your preconceived notions of the brand. It’s true that most of us will never have the resources needed to own such a car, but that isn’t reason enough for a car guy to give up on understanding such a beast. Forget about the money bit… Forget about the stereotypical Ferrari owner… For once, I am asking you to think analytically first. We’ll get back to your heart in a tad.

The foundation of Ferrari has always been based around an obsession for speed and family. Enzo Ferrari began his career as the founder of Scuderia Ferrari. Literally translated, this means “Team Ferrari” and it was under this banner that Enzo managed and sponsored a number of Alfa Romeo based race teams to many wins. By 1938, Enzo was bought out and hired by Alfa to lead their race division. In 1940, Alfa was absorbed by the Italian government as part of the war effort and Enzo’s vision was put on hold for four years.

However, these were an important four years. It was during this time that Enzo began thinking of his own race team with his own cars and his own designs. To fund the project, Enzo reluctantly founded Ferrari S.p.A. and began selling road cars to the public. Built with the same attention to detail and the same demands for performance, Ferrari road cars quickly gained a reputation among the rich and affluent. Always resentful, Enzo saw his customers as status seekers and not as appreciators of his extremely refined and viciously fast street cars. Still, it paid the bills and let Enzo do what he loved most – build race cars.

And there is our first point of relevancy – both Scuderia Ferrari and Ferrari S.p.A. existed because of a family’s obsession for performance. In the purest sense of the word, Enzo was a hot rodder. The second point is less analytical and has to deal with the environment in which these cars were (and still are) built. The Ferrari factory is located in the small Italian town of Maranello. It’s a town that has prospered under the influence of Ferrari since 1943. Generations of families grow up knowing that it is their destiny to build the finest cars in the world. To this day many of the Ferrari departments are made up of men and women who are following the footsteps of their parents and grandparents.

There is no doubt that the contrast between the Ferrari 575M you see here and the Tardel/Cochran coupe is drastic. The sleek and refined lines of the Ferrari almost embarrass the choppy and less functional lines of the Ford. Comparing the driving experience between the two cars is even more laughable. The Ferrari performs brutally in all aspects while the little Ford wouldn’t get a second look from Enzo on any track.

Still, there is something these two cars share… Heart. Just as the Ferrari, the Tardel/Cochran coupe was built around a historical obsession for speed and deep routes within a Family. The 575 was built after decades of learning and teaching in Maranello. The Ford was built by a son that shared his father’s passion for old hot rods built to speed. Sure the end result is a century apart, but the means to that end is not all that different. Heart, passion, and tradition make both of these cars special.

So what about the Black Dahlia? Customs were built purely for style… Surely that is a concept Enzo would spit at, right? Enter Pininfarina – the design firm that Enzo hired on multiple occasions to style his race and road cars.

Pininfarina was started by Battista “Pinin” Farina in 1930 with the dream of transforming car body manufacturing into an independent industry. In his vision, the mechanicals would be handled by car manufacturers while the styling and aerodynamics would be handled by design firms like his own. He began his work purely as a coach builder – taking production cars and transforming them into one-off pieces of art. Pinin saw himself and his other designers as artists with metal as their medium and organic, sexy lines as their output.

While Pinin’s vision of an independent body manufacturing industry never came to be, his company earned a reputation for styling some of the most graceful and elegant cars to ever leave an assembly line. Notable Ferrari examples include the 1952 250, the 1955 410 Superamerica, the 1964 275, the 1968 Daytona, and of course – the 2003 575 Maranello.

And here we are comparing another 60 plus year old car to the new Ferrari. Again, at first glance these cars appear to share nothing at all in common. The gaps on the Ferrari are perfect and each line transitions perfectly into the next. The paint is flawless and the overall fit and finish is impeccable. By Ferrari standards, the Black Dahlia is finished crudely – a coupe turned into a roadster left in primer with little regard for tolerances.

Even so, these cars look right together and it’s because they do share one common value – intent. Just as Pinin considered cars as nothing more than a canvas to express himself with, early customizers built to their eye. They took stock bodied cars, reduced them to their essentials, and made them more organic, sexy, and sinister. In both cases, a car’s body is about style and lines. Pinin Farina, Gary Howard, Jim Bruns, and Franco would all agree – These cars are art.

Conclusion
The drive out to the old Austin airport for this photo shoot was an interesting one. Steve lead the way in the Black Dahlia, Kevin and I followed in the model-a, and Rob tucked the Ferrari in behind us. Through my front glass and rear view mirror I had a good view of all the subjects. The juxtaposition of each car was remarkable and I became concerned over whether or not this was going to work.

It wasn’t until we staged the cars, took a few steps back, and viewed the cars in their natural setting that I realized we were on to something. While technology and time can separate – passion can be a stronger syncing force. In the end and forgetting all inconsequential factors, all three of these cars do share one thing in common – tradition. And isn’t that why we are all here? 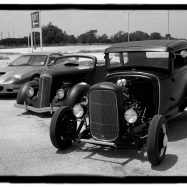 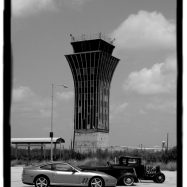 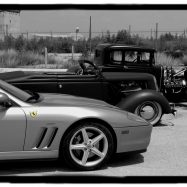 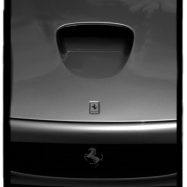 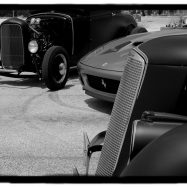 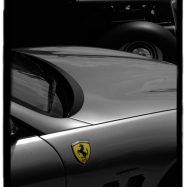 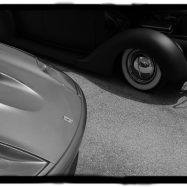 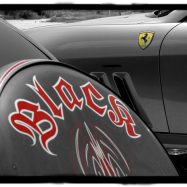 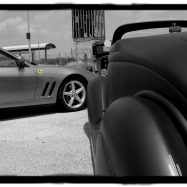 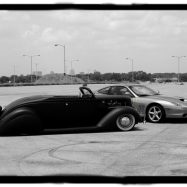 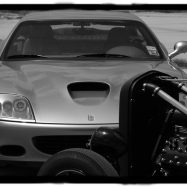 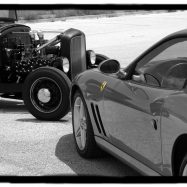 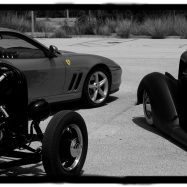 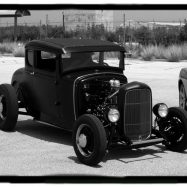 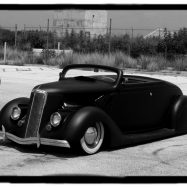 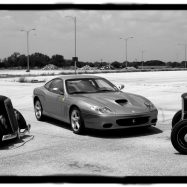