A lot of people don’t know this, but Earl Bruce’s 300 SL was actually the first stateside. So, the car itself was seen by most sportscar guys as an absolute shrine to German ingenuity and technology. And when Earl had it painted candy red, those same sports fans went ape shit.

“How could a guy spend that much money on a piece of art only to ruin it with a gaudy paint job?”

Most of those guys were even further enraged when the paint job went bad and faded… Others probably claimed Karma.

Earl? He was a lemonade from lemons type of guy. When that paint did go bad, he just had Von Dutch paint over the bad spots with flames. You can only imagine how pissed off the collared crowd was afterwards.

“After I turned this thing loose on the world it caused accidents,” recalled Von Dutch. “People couldn’t accept a flamed 300 SL Gullwing back then. They thought I desecrated a shrine.”

I wrote the above for some magazine in 1997. I stumbled across it this morning and was struck by Dutch’s quote. It was as if he figured people would be much more tolerant of him flaming a gullwinged car worth millions today. Or, at least, more tolerant than they were when the car was new.

Also, as an addendum of sorts – I found out later through other interviews that Earl Bruce was a Mercedes freak. He owned something like 50 cars from the marque over his lifetime and this SL was his first of six over his life. That makes me smile for some reason.

I have a lot of respect for Earl. 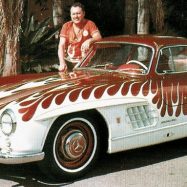 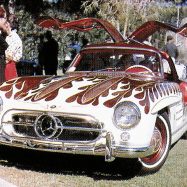 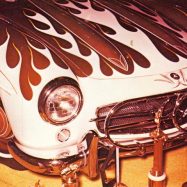 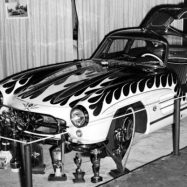 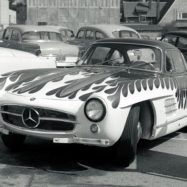 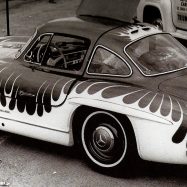 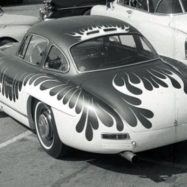 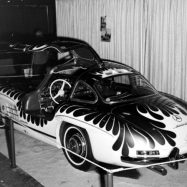