Posted by Ryan on January 16, 2017 and filed under: Feature Articles, Hot Rods

There are people out there that never got the message about rugged individualism making some drastic adjustments in these hyper-neurotic times. These are the guys that are too mature to consider the rat rod movement and too passionate about the grit of old to examine life with something over-restored or glossy. The demise of their type as a whole has left them in a strange spot – looking for the same treasures as others, but with different end goals in mind.

Stephan Szantai is one such man… He owns the 1932 Ford Tudor that you see here. It was originally built in a factory located on the outskirts of Paris, France. You can imagine it tending the daily life of its original owner quite easily, can’t you? A trip to train station. Maybe another to the post office. And yet another to the big City for a night out.

And then the second world war hit and the little car was put away until a reason good enough was given to the French government to allow it back on the streets. The owner cut a hole in the body panel above the gas tank and some kind of a tow hook was added. Germans be damned – this 1932 Tudor was back on the road and supporting the Allied war effort.

In the Spring of 1940, however, the Germans occupied Paris and more than likely, this little Ford as well. It’s quite easy to imagine German soldiers using the car to tow broken-down German staff cars or to haul people from checkpoint to checkpoint. For four years she would have had to suffer this brutality, but eventually she was liberated right along side her birth country.

The 1950’s was a good time to be in France… Much like in the United States, economies boomed and people rejoiced. Life for this Ford Tudor changed as well. Sometime in the early 1950’s, she was acquired by an independent Ford Service shop located on the French Riviera. It was then that she was lettered with, “Spécialiste Ford – Pièces Détachées” which translates to, “Ford Specialist – Spare Parts.”

It somehow seems suitable for this Ford to end it’s service life in such a roll, doesn’t it? And that’s exactly what she did. Eventually, the car was put away in the South of France. It wasn’t until around 2001 or so that she would be heard from again – this time by a hot rodder, Dom Meunier, looking for a decent Tudor body to replace his own with. A deal was struck and Dom went home with the body while a friend of his carted off the chassis.

Dom tinkered with the car for a while, but eventually sold it to a man that truly appreciates the rugged nature of age… the man we spoke of to start this story – Stephan Szantai. Stephan imported the car to the United States via the dock in Long Beach, CA in 2015. He then took the car to Vintage V8 Restoration – a shop ran by Charles Franklin in Orange County. Charles redid the entire chassis of the car and essentially got her road worthy again.

And that’s really where we are now in this story. The incredibly rare European 1932 Tudor you see here has been on this earth for over 85 years and in that time it’s seen birth, a war like no other, service, hot rodding, and now exportation to the birth of that very past time. It’s incredible when you think about it. Truly incredible.

And now, the car is for sale again. Yep, Stephan needs to reappropriate the value of the car and someone else is gonna get the chance to carry on this car’s remarkable history. It will take a special owner. I was hoping I might be the one and I gave it a lot of thought over the long weekend, but eventually decided I just couldn’t afford it at the moment. So now it’s up to someone else that never got the message. Someone else that truly understands the value of history and the passion behind its grit. 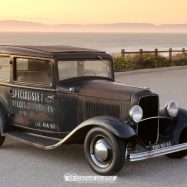 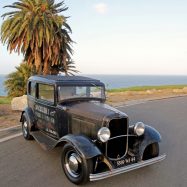 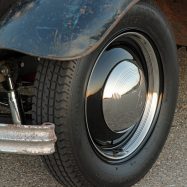 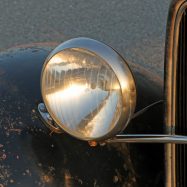 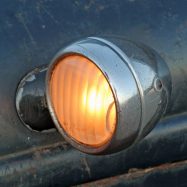 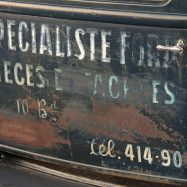 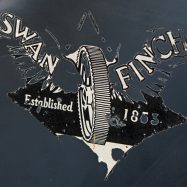 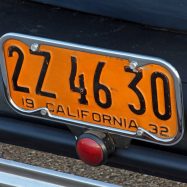 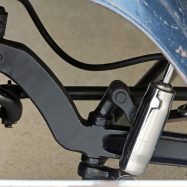 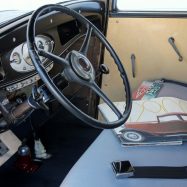 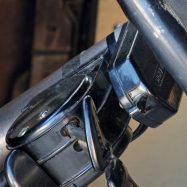 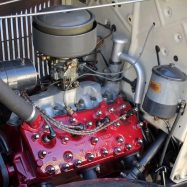 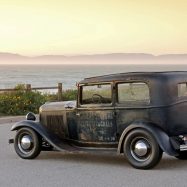 Obviously, this is a pretty special car. A rare one… As such, I decided to include Stephan’s tech sheet so that you could read about some of the difference between the American and European Tudor. Enjoy:

BODY MODIFICATIONS
The rare Tudor retains most of its 1932 Cobalt Blue paint, enhanced by pre-1955 lettering. Unusual features include the Marchal headlights on a dropped bar, tractor taillights and cowl lights different from the North American counterparts. Friend and very talented craftsman Christophe Méhault made the rear frame covers, whilst a Ford collector supplied a fully restored fuel tank. Stephan has a pair of original 1932 California plates, but he kept the French, vintage style front plate that has been on the car since the 1990s. Note the 1950s Swan & Finch stickers on the side windows. Swan & Finch was an American company specializing in lubricants, which suspended its activities in 1957.

CHASSIS & SUSPENSION
Dominique did a great job redoing the chassis: Boxed rails, split wishbones, ’34 Ford rear end, Pete & Jake front shocks, Posies leaf springs and Magnum I-beam, though Charles Franklin replaced the latter with an original axle (of unknown brand) likely dropped in the ’50s or ’60s. He also installed ’40 Lincoln front drums, instead of the ’40 Ford juice brakes. For years, the car ran 1935 Ford wire wheels with 600-16 and 750-16 Firestones that seemed just a bit too tall for the sedan’s proportions. The new 550-16 and 700-16 Excelsior tires (wrapped around genuine ’40-48 Ford steelies) look great with the lower stance of the vehicle.

ENGINE & TRANSMISSION
The 1962 French military Flathead displaces 239ci. Open the hood and you will notice several visual differences, as the block mixes elements from early American Ford Flatheads (bellhousing) and later models (the rest of the casting with the water spigots in front of the heads). Dominique added the dual 1953 Ford truck water pumps, plus the rare Ford (France) intake setup, equipped with a New Old Stock Zenith carb. That same French Ford supplied the 6-volt starter, as those military engines used a 24-volt system. The rest of the wiring has been converted to 12 volts – the generator incidentally came from a Peugeot 403 as seen in the Columbo TV series.

INTERIOR
The interior has received a simple treatment, with a German 1950 Opel front bench, complemented by a rear unit from a French 1966 Simca station wagon. Check out the cool dash with dual glove boxes, which welcomes a 1930s Ford/Jaeger speedo from France, a ’32 Ford fuel gauge and a New Old Stock AC water temp gauge. A ’35 Ford gave its steering wheel that nicely matches the neat Bakelite headlight/horn controls – a 1940s French aftermarket accessory – attached to the column.