When the Boss Chose a Hot Rod…

Its hard to believe that Pixar’s ‘Cars’ came out 10 years ago, but when it did, the film opened the eyes of a new generation of young kids to somehow appreciate Hudson Hornets, ’59 Impalas, and Route 66 for the first time. Wired magazine did an article on Pixar Animation Studios in June of 2004 highlighting the directors and their current projects. For John Lasseter they ask for image themed around ‘Cars’, with a photo of him driving something cool. John is a real car guy and could have shot in any number of vehicles, but he requested to use my ’29 A Roadster. I was surprised and honored at the same time, and it was fun to drive my car right up the walkway of the campus and park right our front of our doors. One funny part of that day involved my windshield; The flat glass was giving the photographer all kinds of glare issues, and he was asking how hard it would be to remove the entire assembly. That’s when I showed him how the frame could hinge forward, essentially pointing the bottom edge right at camera to make the whole thing “disappear”. 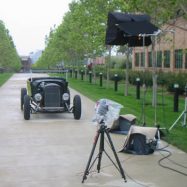 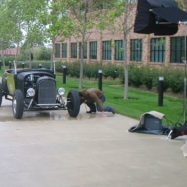 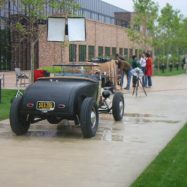 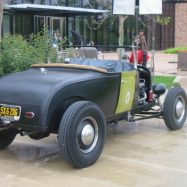 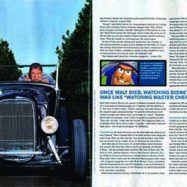 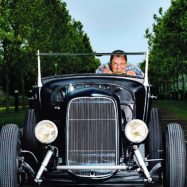